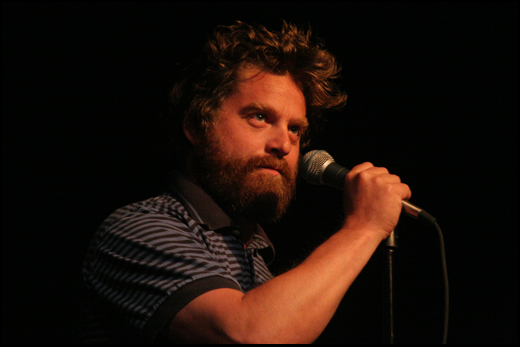 Zach Galifianakis has a Funny Story Zach Galifianakis just took almost everyone single handedly in this yearâ€™s box office with The Hangover. The comedian has now taken to several road trips and is finally finding a huge following. Now he is easily the most sought after Comedianâ€™s of our time. So this will be news to some with his joining the cast of Itâ€™s Kind of a Funny Story, a film that will be directors of Half Nelson and the recent Sugar â€“ Ryan Fleck and Anna Boden.

Itâ€™s Kind of a Funny Story, which also stars Emma Roberts. The film will be based on the adult novel which tell the story of a young boy who after depression is sent to a mental institution, where he ends up meeting some quirky characters that show him the path to the new age. Galifianakis would play one of the adult roles while Emma Roberts will play the teenage love interest.

He can next be seen in the powerful Youth in Revolt. The trailer of that one certainly took me sometime to get. But it will soon grow on us. I think all of us surely will get a lot of excitement from hearing his upcoming projects. Letâ€™s hope he goes from strength to strength.