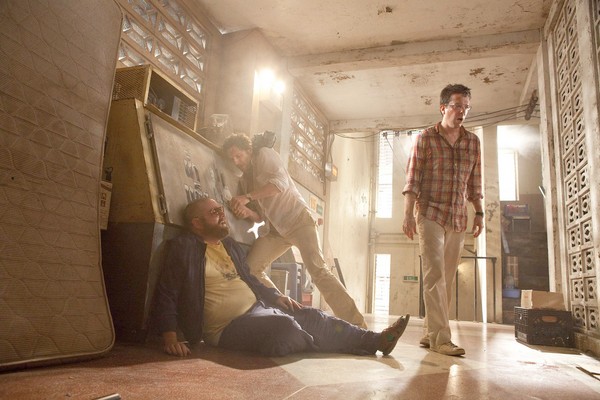 Review: The Hangover Part II is a gonad rush They were trying to make it like the indie flick it was the first time around. There are loads of stuff that need paraphrazing throughout this review. It is still one hell of a d*** ride. Don’t miss this one even if you feel like taking a leak. Let it all burn before the sun comes down. (puns mostly intended)

The film starts two years from the last one. It is still a campy affair with three of them Phil, Stu, Alan and the fourth person who always seems to be missing the action. The Wolf Pack flies out to Thailand for Stu’s wedding and as always matters seems to go out of hand. There is seriously something wrong with the lot of them. They seem to get spiked for various reasons. This time around it comes in the form of Teddy Stu’s fiancee’s brother. He is a foil for all the ensuing bromance that was expected by Alan but didn’t quite happen as he planned.

The whole place takes an Alan complex (instead of a God complex) sames goes for the film as well. Stu is always the butt of all of the jokes. There is also couple of short bursts of realization that seem to come out a little too strong. The jokes seem to go down under most of time. The hard R was sort of warranted for this one. There is also song thrown in for Alan for us to take away with.

The music is one of the strengths of this movie. Loads of people will run to the store to grab the soundtrack of this sequel. It really betters on the last one and some really solid rock songs. Kanye West seems to be everywhere this time around. Monster was also used really well for the genesis of the Hangover and also for the customary airport walk sequence.

There are some interesting cameos that would spoil the plot if I revealed them. This is strictly a one time watch. It is probably a lot better than the last week caper massacre Pirates. The three of them seem to be heading on to pulverize Johnny Depp at the box office this week. Some of the great misses is the wasted ending. It really should have been given another look. Sticking-to-the-formula method seems to work sometimes but it also lathers up the film for disaster at certain places.

The monkey plays a perfect foil for the baby in the last one. The drug mule stint really did not work for me. The joke that kept playing in the trailer worked better. There are some other ones that will take you unawares. Alan really worked out a way to be absolutely obtuse to the plot. Alan played by Zach Galifianakis really takes a back stage in this one. It is really Ken Jeong who really steals the show this time around.

Ken Jeong has some of the best lines in the film as well. His comraderie with Zach makes the latter feel lesser this time around. The script also works well with repetition. The famous Ken Jeong scene in the last one where he jumps out naked from the trunk of a car and just runs away can really not be replicated. The director does tone down things in other sides of the plot for new things to breath. It feels like Todd Phillips wants to continue make the same story but reworking and fine tuning what he has done wrong in his previous work. Ken Jeong will surely be inducted to the Hollywood hall of fame and will be the only man in the world who called absolutely anyone a Nigga.

The question of what you might say is wrong with the film. It is the setting and the lack of references. Martin Scorsese was really beautifully referenced in the last film in the beautiful desert. But over here the references are really silly. It has taken the atypical Tony Jaa setting and really not done anything with it.

There is some relief in the moment where they throw couple of candles in the sky. In the process trying to capture the F***ing spirit of Bangkok and Thailand. The authorities are surely not going to like this one. But there are going to various groups that will find this offensive. Everything will probably cancel out each other.

The script was a little too cramped up with some interesting skits and some great ones. But dont miss out on the ending of this film. Things just pop out of nowhere by the end of this franchise churner. There is a lot of room for another film that will make this one of the most loved franchises in some time.