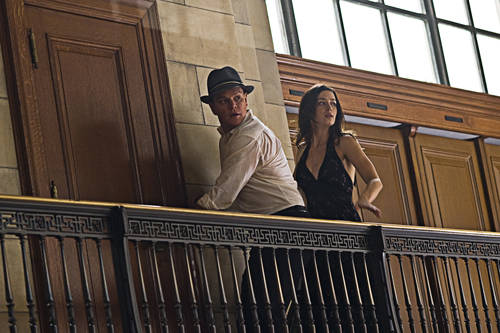 There has been a lack of films that work on the concept of free will. Inception worked on the concept by getting into the world of dreams and worked in depth with the theme. It is an illusion of free will that makes everything difficult to fathom. The abrupt ending in Adjustment Bureau was to cater to the commercial audiences. It still backfired and the audience was left cold not really get what they were looking for. There was a marginal compromise on the part of the writer making this film a lesser effort.

The film is based on a book by Philip K. Dick called Adjustment Team. It deals initially with the crusades of a politician running for the United States Senate. He loses his lead and is seen working on his concession speech in a hotel bathroom, where he meets a woman hiding in one of the stalls. She advices him to be more original and honest. The speech that comes after becomes a cliché of modern times. There is a reversal and he becomes a favorite for the 2010 Senate race.

Then things begin to turn on itself with a man instructing a co worker to ensure David spills his coffee. The film turns into a Bourne style chase that the director is familiar with. It really beckons your attention. These chases provides the much needed tease that the original story did not really look for. The seminal concept worked on by Philip K. Dick seems to take a back seat. But it is in the character played by Anthony Mackie. He seems to be the only character who seems to work around the traits described so beautifully in the book. His character is allowed to breath with not so much flourish like the rest of them. The restraint he shows in several key moments brings the much needed depth to the proceedings. Matt Damon has also worked hard to shirk his superstar mannerisms. But at any point in the film he itches to shift into Bourne mode. Unfortunately it gets predictable when we see the hat on the Adjustment Team’s head. It was meant to be the blessing as well as the curse that Matt Damon had to deal with. The hat as a plot device destroyed the whole central theme and was a compromise. Minority Report was another story where to channel the story the director had to make Tom Cruise run. Hollywood has this thing with running characters and heightened soundtracks that makes great works seem banal. Lest I forget the soundtrack also suffers with an increase use of studio defaults and not looking at a seminal or revisionist concept. The film would have been more powerful in the able hands of directors like the late Stanley Kubrick and the current neo wave practitioner Michael Winterbottom.

Another character that needs a mention is The Hammer. He mouths all the concerns of this world like a broken tape recorder. It demystifies all the dystopian and utopian ideals of the world and the Adjustment Bureau. It leaves lot to be desired. George Nolfi still does deserve a mention for bringing this story to the big screen. But it is in this act of getting credit for taking up a story like this George seems to have lost his way.

The woman Elise is more of a restraint distraction. She is embodied with equal grace by Emily Blunt. She really embodied the character to make it real. Emily Blunt also gets some of the more real and dialoges in the film. But it was the lack of fortitude and good judgment on the part of the director that did not lift the film.

Adjustment Bureau is not a great film and it does not try to be anything else either. But it could have been something more if it invested more time in divulging the concepts that Philip K. Dick took time to flesh out. The character Elise says to David “…you ruined me. I didn’t want to settle for less”. It seems like the director didn’t take a cue from that and lost the plot completely.