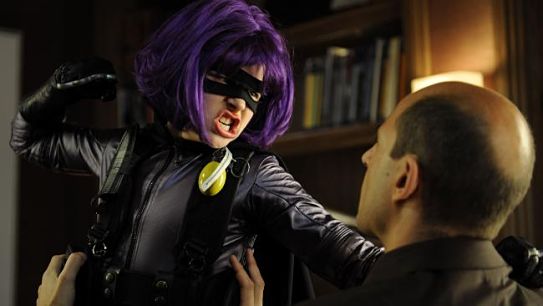 With an opening line like that Hit-girl hits the screen for the very first time and guess what she definitely leaves a good impression.

The film tells the story of Dave Lizewski (Aaron Johnson), a nerdy teenager with a non-astonishing unexciting life. He keeps asking himself and all his friends around him, “Why has no one ever been a Superhero? So, One day, out of sheer boredom, he decides to become a superhero. He decides to become a real life superhero called Kick Ass but gets his ass kicked the very first try to stop an ongoing crime. He contemplates quitting, but decides to keep on trying again, this time gaining some success. Through his adventures, he comes into contact with totally pro superheroes Big Daddy (Nicholas Cage) and Hit-Girl (ChloÃ« Grace Moretz) who are hell bent on putting an end to drug lord kingpin Frank D’Amico (Mark Strong). Kick-Ass being the smart ass he is, gets involved and entangled in a way only an untrained buffoon like him could get involved. And there are some small sub plots involving Dave’s friends and his girl friend who just supports the lead characters in the best way possible.

I have been reading what a lot of people have expressed their concerns about this movie which is the Violence in the film. This movie is brutal and is not for the weak of heart (hint: Roger Ebert). People getting their hands and legs cut off, being tossed into a large microwave and blood splatters all over the place, being burnt alive and much much more. Those who felt after seeing the trailers that its a kids movie, its NOT. This movie makes the SAW series and Saving Private Ryan look like they had nothing for an R rating. The comedy is very raunchy, dirty and of course funny. This is another thing that might throw people off. Most people go to see this film expecting it to be something and end up being disappointed because its not like the trailers. Make no mistake, even though the violence is graphic, it’s still over-the-top, and should not be taken seriously.

So, do either of those things actually detract audiences and fans from watching this movie? No. The movie is something different, plain and simple. It conjures up something, something beautiful, something that makes all other super hero movies look like a joke (except Dark Knight of course). Every single frame flows with so much visually entertaining shots that you feel entertained in a weird sort of way. Not only me, but most people at the movies were mocking and enjoying every bit of the sadistic fun in movie violence. Its just pure cinematic escapism. It’s serious, funny and exciting when it needs to be. And then comes the whirling cascades of intricately choreographed action sequences. If your looking for violence mixed with some of the best shot action sequences involving a 11 yr old girl talking ****, Kick-Ass will fulfill your blood lust for sure. All the action scenes are gritty brutal massacres with no hint of sympathy spared for and on anyone.

The movie pays its tributes to a lot of movies and a lot of classic movie scenes in a sense that it pays homage and doesn’t in any way try to copy or steal anything from any film. Superman’s theme while Dave is wearing his Kick-Ass costume, Batman’s theme while Red Mist and Kick-Ass driving around, some of the best background scores by John Murphy which he had already used before in films like 28 Weeks Later and Sunshine. Not to mention Hit-girls pose similar to Carrie Anne Moss from the Matrix and who could forget the Tarantino-esque score right at the end. The cast is led by charismatic rising star Aaron Johnson (Nowhere Boy) who effortlessly delivers a goofy but likable persona of a superhero as Kick-Ass who is the central character in the film. Christopher Mintz-Plasse adds a welcome gawky cockiness as spoiled rich kid superhero Red Mist, and the ever so consistent Mark Strong offers another extremely high octane villainous performance. However, the film’s real triumph lies in the hands of a young girl and her dad. Nicholas Cage shreds expectations with his superb Batman ripoff Super hero ‘Big Daddy’ with a voicing tribute to the Batman of old Adam West. Some say a 13 year old girl, Chloe Grace Moretz stole the show which I agree but what I don’t agree is that the film should have been named Hit-Girl instead. Everyone forgets even what Hit-girl said in the film, “Without Kick-Ass, there will be no Hit-girl”, and I think that is how it should be. Chloe Grace is a revelation, stealing the show as innocent down to earth Mindy and as an assassin kind of vigilante Hit-Girl, and never failing to astonish how far her role would push the boundaries of anything and everything humanely possible. Director Matthew Vaughn knew exactly what he was looking for, giving each super hero a background story so that the audiences had something more to hold on to while enjoying the film.

Kick-Ass is everything I wanted it to be, genuine at heart, exciting, exhilarating, emotional, hilarious and just simply awesome. You just wish every super hero movie was made like this one. Definitely, a must watch film.