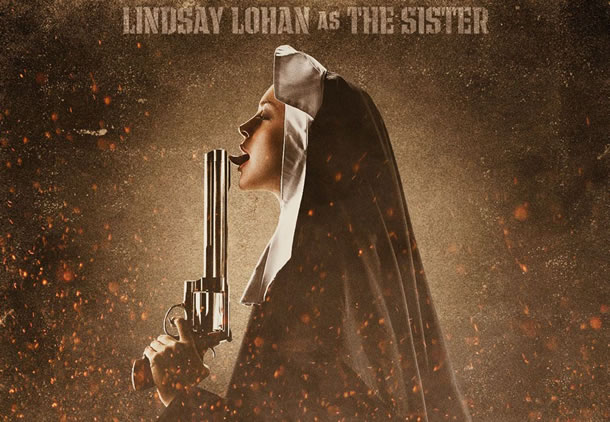 Lindsay has gone through the worse stage of her career in the last couple of years. She is right now rotting in jail somewhere and is not certain of when she might return to the form she showed in the beginning of her career. She had one last appearance before she went to jail. It was in the film directed by Robert Rodriguez called Machete.

She plays a gun licking nun. She is a socialite who has a love for guns. The picture will say it all actually.

Machete stars Danny Trejo as Machete, a renegade Mexican Federale and tough vigilante for justice, who roams the streets of Texas and makes a mess of things. It seems to be coming from the same universe as the films which made Robert Rodriguez famous.

Machete is hired to kill a Senator and the plan is foiled and he is framed. He will be joined for his quest revenge by some eye candy Jessica Alba and Michelle Rodriguez. This will be strictly for the eyes and nothing interesting will really happen in this.