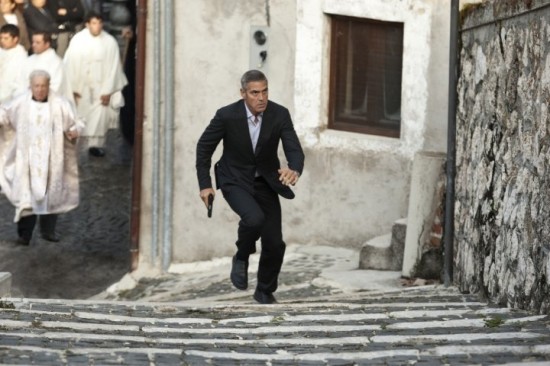 George Clooney in The American trailer Another really bad trailer is out for the American. Something tells me that this is not going to be really good. There is a lot to be desired from the plot itself. But we will be judge of that once the film is out. The director Anton has done good work on his last film called Control. The pace of the film will be something to look out for. It goes all anti Bourne with pacing this hopefully is intentional.

The footage almost looks the same as the previous film. It has gone a step ahead in the background score department. But nothing seems to go away from the fact that this might turn out to be a small misstep on the part of the director and actor.

Here is a small plot synopsis of what to expect from the film.

When an assignment goes wrong and a lover ends up dead, he vows that the next job will be his last. This final obligation takes him to a picturesque town nestled amongst lush Italian hills, its historical piazzas bursting with life. But to Jack, every location is a trap and every person a potential threat. Still, he surprises himself, enjoying confessional conversations over Armagnac with an insightful priest and slipping into an affair with a local beauty. But by letting his guard down, Jack may be tempting fate. A dangerous shadow-dweller shows every sign of closing in, and the mysterious woman who has hired him may not be all that she seems. As an increasingly wary Jack contemplates life, love and death in Italy, the film escalates into a climactic showdown through the cobbled maze of age-old alleyways. This sexy, suspenseful and intricate story blends intrigue and passionate romance within a searing morality tale to finally reveal the heart of this deeply private man.