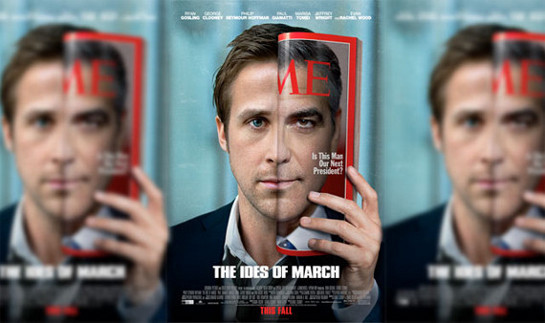 The new film by George Clooney stars the extremely talented and Talking Films favorite Ryan Gosling. The Ides of March is a film that is expected to be one of the front runners in next year’s Oscar season.

The film was adapted from Beau Willimon’s play Farragut North. The film features Ryan Gosling as a young but influential press secretary who has to manage a political scandal as he navigates the tricky waters of a Presidential primary race. The rest of the cast includes Paul Giamatti, Philip Seymour Hoffman, Evan Rachel Wood and Marisa Tomei. Stephen is a wunderkid press secretary who has built a career that men twice his age would envy. During a tight presidential primary race, however, Stephen’s meteoric rise falls prey to the backroom politics of more seasoned operatives, and his one night stand with a teenage staffer proves to be more complicated landscape about the lust for power and the costs one will endure to achieve it. Tell us what you think of the trailer and the cast.