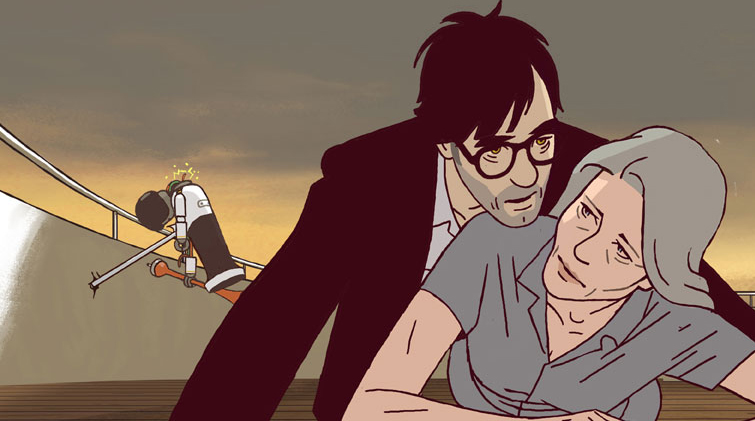 First Look: Ari Folman works on The Congress next Ari Folman has been working for sometime now. But in 2008 he brought out one of the most powerful animation film of our time Waltz with Bashir. Nothing really could surpass the truth in that. The next film he planned to adapt was the Stanislaw Lemâ€™s story The Futurological Congress.

The short story is only partially used for the film is about Ijon Tichy, a man who is propelled into a world of hallucinogenic drugs have replaced reality. Here is the still from the man who brought us the movie Waltz with Bashir gives his next big animated feature. The film stars Robin Wright Penn and is called simply The Congress.

The still is also details some of the plot points Ari Folman had discussed. In December 2008 he said the film was said to be a live action animation hybrid, with the animation becoming more dominant over time. This is what he had to say to THR â€œThink of your favorite young actress. She will appear that way at the beginning, and then as the film goes on, she will be drawn like she is 50.â€

Folman also later told that he will be making changes to Lemâ€™s story considerably by making the primary character female and tweaking further plot elements. We are gonna take some of the stuff we did in Bashir but we are going to adopt it to wild fiction animation, with a real actress that is going to be drawn and play herself, basically. It is going to be her story.

The is about the world of an actress played by Robin Wright Penn. She is in decline because the studios just sampled her and they kept using her image. She walks into the future, which is a world that is totally controlled by the manufacture of psychiatric pharmacology products.

I think Folman is right man for this job. He might make it a step above the powerful Philip K Dick adaptation of A Scanner Darkly. This also one of the gems we have been citing in the last couple of days after the finding of Precious.

The film will be first screened at the Cartoon Movie which will be held between March 3 rd and 5 th.