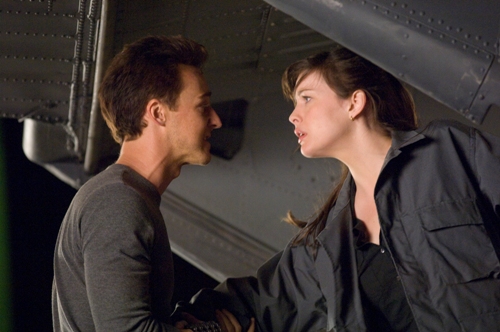 Edward Norton really put his soul into a flimsy movie like Incredible Hulk. It almost played out like one of the Nike ads. But he has given some juicy details on his intentions of playing Hulk during the Leaves of Grass promotion. The film has been liked by a lot of people. The obscure tones of the film have been much liked by the people who got a chance to catch it at the Toronto Film Festival.

So there are no rumors that Edward wonâ€™t smash. He has just smashed the recent Iron Man 2 cameo as being hogwash. But there is a chance of seeing him in the Avengers that will be vast.

So during the interview he was asked if he would play the role again and he said. â€œIn the comics, there was always a tension between the rest of the superhero community and he was always this problemâ€¦ They treated him as this problemâ€â€œI think thatâ€™s a fun way to go with it.â€
Many wonâ€™t dispute the fact that he was the better Banner. But it was a lesser movie. So if he gets a chance to play the part with a better director, he should jump at it.

But this leaves everything lying in the balance. The second film will be a pleasure but missed. It is really too early to talk about the Avengers series. But someone has to start.