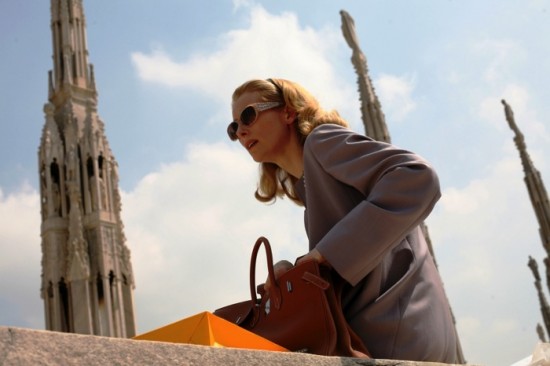 Trailer Watch: Tilda Swinton in I Am Love So much of reinvention of her craft Tilda Swinton is all set to stand the tests that will be bestowed upon her. She is like the Archangel of Misery and angst. There could be no one else to play Love. In the process challenge the very foundation of it.

The film I Am Love was described as Visconti on Acid by Tilda Swinton. But the acid has gotten ahead of her a little bit in some of the tapes from the film. The camera is like on a glider in this one. It is floating most of the time. This film will be a delicacy that begins to taste sour with time. Tilda has already worked with Luca Guadagino on The Love Factory.

Luca has brought a really visual and delicious palette. The audience is really going to feel a thrill by the end of this film. It is the finale that has got many people expecting it to be played down. The politics is played out in various quarters throughout the film.

Tilda also looks at her stylish best and will try to channel a sophistication that is not too foreign to her. The queen of the independent movement she slowly has turned into.