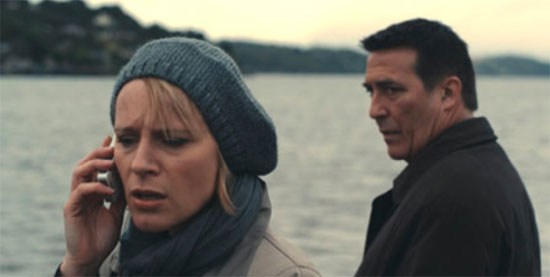 For those of you guys who think this is the new Twilight movie trailer sorry it is not. The Eclipse trailer is an indie drama that provides a metaphor for loss of a loved one and a pain and fear of moving on.

The Eclipse directed by Conor McPherson is about Michael, a widower who meets Lena, a horror novelist at a local book festival. The film works on many levels and is not a simple haunting story. The two of them develop a romantic relationship and Lena begins to believe in many of the truths told by this man. Matters are complicated with the presence of a fellow writer played by Aidan Quinn who feels threatened by Michaelâ€™s relationship to Lena.

The trailer for the film lays on the horror elements a little too much. It leaves out many of the character elements of the film.

The Eclipse will be hitting theaters as early as March 26 th. Check out the trailer after the jump read the official synopsis.

THE ECLIPSE tells the story of Michael Farr (CiarÃ¡n Hinds), a teacher raising his two kids alone since his wife died two years earlier. Lately he has been seeing and hearing strange things late at night in his house. He isnâ€™t sure if he is simply having terrifying nightmares or if his house is haunted. Each year, the seaside town where Michael lives hosts an international literary festival, attracting writers from all over the world. Michael works as a volunteer for the festival and is assigned the attractive Lena Morelle (Iben Hjejle), an author of books about ghosts and the supernatural, to look after. They become friendly and he eagerly tells her of his experiences. For the first time he has met someone who can accept the reality of what has been happening to him. However, Lenaâ€™s attention is pulled elsewhere. She has come to the festival at the bidding of world-renowned novelist Nicholas Holden (Aidan Quinn), with whom she had a brief affair the previous year. He has fallen in love with Lena and is going through a turbulent time, eager to leave his wife to be with her. But all Lena is trying to do is extricate herself from this mess and just get through the next few days. As the festival progresses, the trajectories of these three people draw them into a life-altering collision. Embellished by the supernatural, THE ECLIPSE is a film about the challenges of love, fear of the unknown and release from the burden of grief