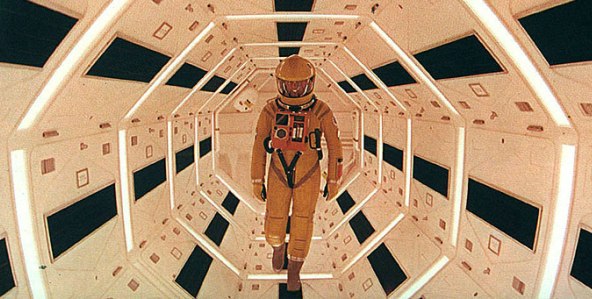 Science fiction films are the backbone to the film world. Chilling horror from “Alien”, epic story from “Star Wars”- the scope, imagination, and daring narrative of science fiction make these films some of the best funded, beautifully scored, masterfully shot, and widely loved. But is there a start to this genre?

The motion picture that surely must be credited with making the foundation is Stanley Kubrick’s “2001: A Space Odyssey”. This was by no means the very first science fiction film, but its audacity transformed the way science fiction was received by all. Its broad strokes trickle down to films all around, whether its huge orchestral score is parodied on commercials, or the intricate spaceships are replicated in more modern films, you can see the influence everywhere.

One of the most sung films of 2013 was “Gravity”. This prime sci-fi whisked viewers to space, with all its beauty and silence and terror. One begins to see the connection with another pair of astronauts in unfortunate situations, drifting in the darkness. Both are on costly missions, only one’s is to dismantle a vicious computer that has turned on its creators. How about another contemporary example, this one more subtle? Take the upcoming revamp “Godzilla”, whose trailer depicts people leaping through crimson clouds, shrouded by glimpses of the enormous monster. But there is something else to this; something almost as menacing as that scaly beast…it’s those haunting voices, droning on and on, progressive in their intense volume. I have heard this music before, except being sung over the imposing darkness of deep space. Where else but “2001”? Stanley Kubrick received his only Oscar for “2001”, winning for the best effects. From frame one, you can see why. Not a single computer generated imagine was used, and for a late 60’s film, it more than holds up. In a stunning sequence near the end, we see shots of seemingly colossal expanding space formations- whirling galaxies and bursting stars. This was achieved by shooting very close up on a small pool of chemicals. By placing little droplets of ink into the pool, colorful motions would form. It is a replication of what occurs when you put soap in grease. The ingenuity of the filmmakers keeps this film standing tall in its visual appeal.

Science fiction (as can be imagined) is a fairly new genre in both print and motion picture. Perhaps these far fetched concepts were thought of a while ago, but only know is execution a rather simple matter. What was science fiction two decades ago is now just…science, nothing fictitious about it. These are the myths of the modern age, and it’s the way we tell our existential human stories now. Some see a contradiction. How can you convey the human in something so mechanical? To me this is no contradiction- it’s the largest question we face now. How do we stay human amounts all these machines? Does all this technology make us only walking brains, the sole function to operate machines? All of the above is addressed in science fiction.

“2001: A Space Odyssey” stands as the quintessential science fiction picture. You can’t help but observe all the ways that it has emulated into newer and newer ways, providing a sound blueprint for one of the most adored genres in film.