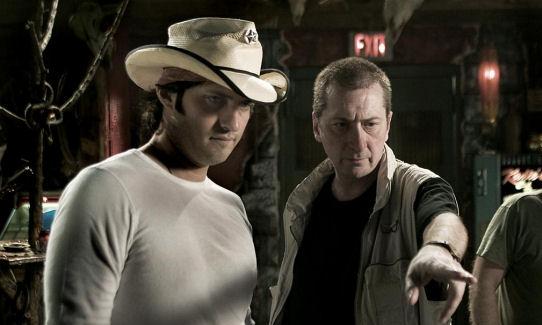 Load of websites have been streaming info on some of Robert Rodriguez next couple of projects. He has already started work on his Predators remake down in Austin. He was a little chatty about his projects like the Spy Kids sequel, Sin City 2 and a planned Machete trilogy. I think everyone has been hounding him about the Sin City sequel ever since that film came out.

On the Sin City topic he is planning to take on it some time soon. He told there is a plan to start late next year, but he hasnâ€™t gotten to it yet. There is the intention to start production of the film but there is really no drive when it comes to the two accomplices Frank Miller and Robert. The film has been scripted back in 2007. But the possibility of making the film has got a lot to do with the final casting of the film.

So we can really give up hope on that project for a little while. But there is something else that is creeping up in his fertile mind. A planned Machete trilogy is totally in the works after he finishes work on Predators. Now here is the actor of the film who tells that Robert Rodriguez has been making work on this role for ages now.

“Robert had been training me for Machete since we did Desperado,” said Danny Trejo. “Everybody thinks that Machete came out of a trailer, but it didn’tâ€¦ It is a culmination of Desperado, Once Upon a Time in Mexicoâ€¦ There’s even a little bit of From Dusk Till Dawn in there. I think it’s gonna be one of his best. And I’m not just saying that â€™cause I’m the lead; it’s just a great movie. I think everybody’s gonna walk away from that movie with some opinion. It’s a battle for our border, you know? People are really serious about what’s going on with the border, and it shows the negative side of both sides. Not just, you know, we want everybody to cross, or we don’t want anybody to cross. It shows the negative side of both sides. Everybody’s gonna be pissed off!”

Rodriguez adds that he has been talking about this franchise back in 1994 when he was working on Desperado. Trejo has already the name of the film Machete, Machete Kills and finally Machete Kills Again. Robert also got candid and said he would like something in the lines of Machete in Space.

I think the Predator remake will surely water our appetites in the coming months. Here is wishing him the best of luck for all his future endeavors.