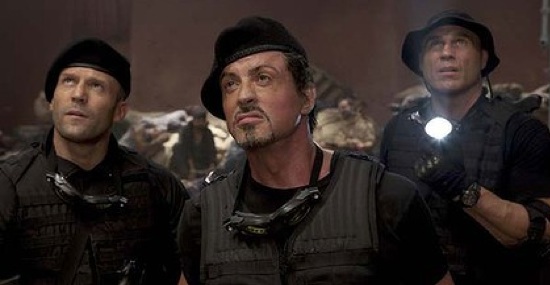 Review: ‘The Expendables’ is an entertaining fare First up, the cast is great, even though movies that feature a lot of big names generally do bad. The only problem is, I think there was just not enough room for all of these names to have their time on screen. However, they all work well together and everyone had their moment to shine I guess.

A group of elite mercenaries, the Expendables meet up with “Mr. Church”, who offers them a mission in Vilena, to overthrow a brutal dictator, General Garza. Busy with other things, Trench (Schwarzenegger) gives the contract to Ross (Stallone). Ross and Lee Christmas (Statham) do initial reconnaissance after meeting with their contact, Sandra, only for the mission to go awry. As expected, this is all leading up to an eardrum-bursting, vein-popping 20 minute long finale filled with gigantic explosions, erratic gunfire and beefy men angrily shouting at one another. There’s even a moment where Couture watches a man roast in flames and runs up to punch the poor burning guy in the face.

The good about all the action is its very sharp and fast which makes it all looks pretty cool but the downside is its all just senseless. The film is also badly edited, I don’t think Stallone is meant as an action director. The shots are too close up and gets you too confused to see who’s fighting who. Jet Li who is an incredible martial artist is toned down too much. If this film had different stars in it, I think The Expendables would have been a terrific film, but because Stallone was saying that this was an “homage” to the 80’s action films, this was a huge disappointment. I don’t intend any disrespect to Stallone, he clearly has a lot of admiration for the genre and he has fully displayed it here, but the end result is less than satisfying. Likewise, his script, written alongside David Calllaham, is rather patchy, containing some weak writing with irritating clichés.

Mickey Rourke is a fabulous actor, undoubtedly the most respectable name in the cast list and his talents shine bright in the three scenes he’s in, the second of which contains a heartfelt monologue about heartbreak on a past mission. It’s a shame he wasn’t used more, because his performance momentarily lifts the film sky high above the punch-punch, bang-bang of the rest of the movie.

Stallone had the opportunity to do something spectacular, but what we’ve ended up with is a bit of a mess. There are too many characters, leading to many being undeveloped and the ’80s action vibe isn’t enough to hold it together. But if you have nothing else to do and want an adrenaline rush, then this movie might just work well for you.