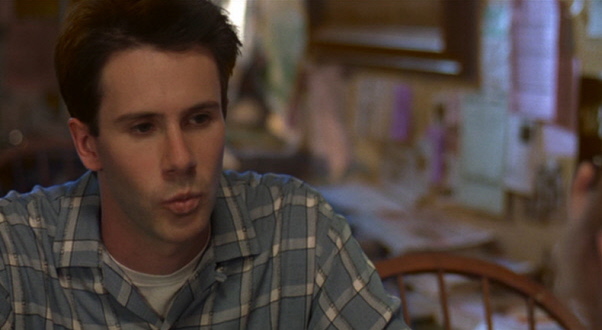 From the Vault: Kicking and Screaming (1995)

There is void between the subservient drudgery of high school and the labor and responsibility of adult life known as college. For some, this half-decade of existence blurs into an incoherent pulp of parties, drugs, and sex. For others, it is a persistent rush of exams and studying. In this newly acquired independence can be discovered the foundation of bright and hopeful futures: quixotic aspirations and pipe dreams of changing the world and, just maybe, becoming important. Knowledge. Ambition. Talent. Wealth. Power.

And then, after four years of intense work and preparation, it ends.

The antiheroic college grads of Noah Baumbach’s Kicking and Screaming are stuck in a bottomless pit of post-collegiate nothingness, enslaved by the post-partum depression of the academic world.  They have taken their courses, collected their diplomas, and have found themselves waiting for…something.

Grover (Josh Hamilton), Otis (Carlos Jacott), Max (Chris Eigeman), and Skippy (Jason Wiles) linger around their alma mater for half a year, trying to comprehend the significance of their futures while not debasing their pasts. They are plagued by questions that dance between absurdity and tragedy: Do I have to start paying my student loans back tomorrow? How do I make a bogus job sound good on a résumé? John Keats was dead by twenty-four—what have I done lately? Why am I still here?!

Noah Baumbach, who would later work with such films as The Squid and the Whale (2006) and Greenberg (2010), does a magnificent job in his directorial debut. The camera follows the graduates around their daily lives, a silent observer. Flashbacks, each beginning with a black and white snapshot, are periodically used to capture the nature of the characters and their histories. The final result is a truly expressive piece that focuses on the desperation and affliction of the post-adolescent society of Generation X.

The movie is full of wit, in a certain know-your-Empirical-philosophers kind of nerd humor, and plays out something like a really funny car accident. Between dying dreams and broken relationships, part-time jobs and campus bars, the four friends flail desperately, trying to grab on to some kind of meaning. But with a good quarter of their lives behind them, the effort is starting to seem futile, and the carelessness and ease of their youth seem gone forever.