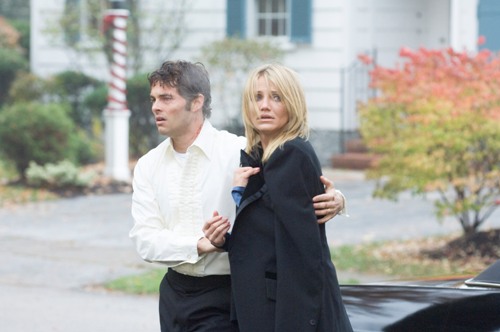 Review: The Box is a Missed Opportunity Let me get straight to the point. The Box starts of well and even does till the last 20 minutes, where everything just turns into a Sci-fi Fantasy which just falls apart in the final few minutes.

The Box is set in Richmond, Virginia, in 1976. It tells a story of a family (Cameron Diaz and James Marsden) who are struggling with financial problems. One night they receive a box that has a red button. The next day they get a visit from a mysterious, disfigured man (Frank Langella). The man presents them with an unusual offer. If they push the button, two things will happen, somebody somewhere in the world, who they don’t know will die and second, they will receive a payment of 1 million dollars. This sets in motion a set of events that will change their lives forever.

But even though I liked the story, the script was a bit messy. It almost felt like Kelly had too many ideas, even if they were good ones. Cameron Diaz’s southern accent just wasn’t believable at all but James Marsden did a decent job. There are problems in the acting through out the movie and it’s hard to say if it’s deliberate or not, but quite often the dialog felt unreal and even fake sometimes. Frank Langella on the other hand, was very creepy and frightening, and more or less ended up carrying the whole movie.

I think Richard Kelly has huge potential and even if he still has some soul searching to do to make his storytelling as perfect as it was in Donnie Darko, I’m convinced his debut film won’t be his last masterpiece.