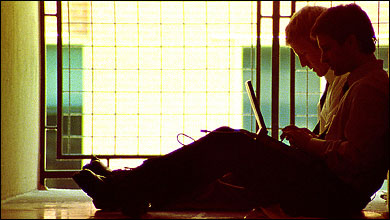 Primer director will be working with Rian Johnson Shane Carruth has been out of work for some time now after his powerful science fiction debut Primer. He wrote, directed, starred, edited, and even composed the film for a reported budget 7000 dollars budget. He is right now currently working on A Topiary, but the funding has still not come through.

Rian Johnson has already read the script and has shown interest in directing a film with him. He is working on his next film called Looper. It is a time travel thriller starring Bruce Willis, Joseph Gordon Levitt, Paul Dano and Emily Blunt. Shane Carruth will also be joining him on this project.

Johnson responded that Carruth is working on some effects for the time travel sequences. Carruth is known for his realistic depiction of time travel in his own movie called Primer. Looper sounds like the perfect film for him to take on.

Looper is a time travel movie, set in a near future where time travel doesn’t exist but will be invented in a few decades. It is pretty dark in tone, much different from Bloom, and involves a group of killer who work for a crime syndicate in the future. Their bosses send their targets hogtied and blindfolded back in time to the Loopers, and their job is to simply shoot them in the head and dispose of the body. So the target vanishes from the future and the Loopers dispose of a corpse that doesn’t technically exist, a very clean system. Complications set in from there. Tell us what you think of this development and share your views.