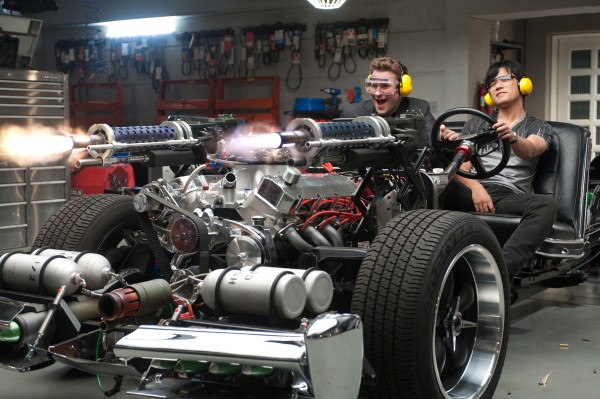 Clocking just less than 2 minutes this trailer with some better footage will be the one to watch. Michael Gondry seems to have to taken lots of crazy ideas to make this one entertaining.

Seth Rogen seems to be the least interesting part of the trailer. Christoph Waltz will be an interesting element to the story and the trailer as well.

Here is a small synopsis of the film which will be hitting you both in 3D and 2D versions on January 14 2011.

Britt Reid (Seth Rogen) is the son of LAâ€™s most prominent and respected media magnate and perfectly happy to maintain a directionless existence on the party scene â€“ until his father (Tom Wilkinson) mysteriously dies, leaving Britt his vast media empire. Striking an unlikely friendship with one of his fatherâ€™s more industrious and inventive employees, Kato (Jay Chou), they see their chance to do something meaningful for the first time in their lives: fight crime. But in order to do this, they decide to become criminals themselves â€“ protecting the law by breaking it, Britt becomes the vigilante The Green Hornet as he and Kato hit the streets.

Using all his ingenuity and skill, Kato builds the ultimate in advanced retro weaponry, The Black Beauty, an indestructible car equal parts firepower and horsepower. Rolling in a mobile fortress on wheels and striking the bad guys with Katoâ€™s clever gadgets, The Green Hornet and Kato quickly start making a name for themselves, and with the help of Brittâ€™s new secretary, Lenore Case (Cameron Diaz), they begin hunting down the man who controls LAâ€™s gritty underworld: Benjamin Chudnofsky (Christoph Waltz). But Chudnofsky has plans of his own: to swat down The Green Hornet once and for all. The Green Hornet stars Seth Rogen, Jay Chou, Christoph Waltz, Cameron Diaz, Edward James Olmos, David Harbour and Tom Wilkinson.