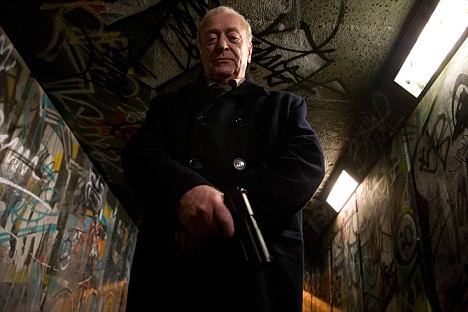 There seems to be a revival of the yesteryears action stars in last couple of year. Now we have a stupid ass John Trovolta movie called From Paris with Love. Then last year saw Liam Neeson jump at his action role Taken. But the film also turned out to be hit in the states. This was certainly unexpected. Now we have broken bones British actor Michael Caine doing the tango in Harry Brown. Out of these films I will still think Gran Tarino encompasses the old man action genre to the tee.

Not sure if Michael will need a lot of props for this one. At the tender age of 76 he still seems to be packing a punch. But for him to go back to his Get Carter days will be too little too late.

The film is directed by newcomer Daniel Barber. There is really nothing known about the guy but he seemed to have enjoyed both Taken and Gran Tarino. He sort of mixed the two of them and created a new curry. The film is written by Gary who is known for his films like Shooters and the last drop. The presence of Michael Caine has also added a string of amazing British talent Emily Mortimer who was last seen in the Transiberian and Liam Cummingham. Hopefully after the trailer debut people will go and distribute this bloody film. Here is the trailer after the jump.