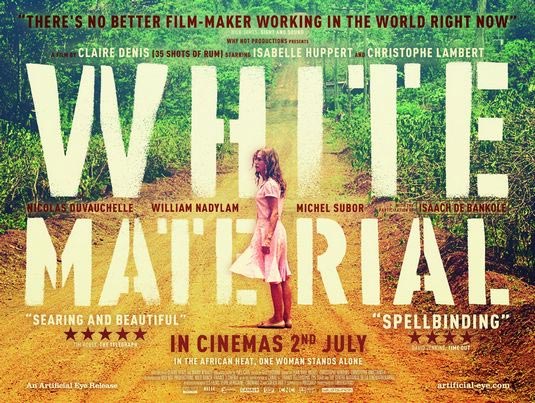 It has been while since I put out a trailer for this movie. But finally there is one with subtitles. It is expected to release in the UK on July 2 nd. So the excitement for the filmâ€™s release is really something actually.

White Material is directed by one of the most sought after directors of our time Claire Denis. Her films our known for their stark realities just last her film 35 Shots of Rum was the darling of all the critics in North America. Her new film is called White Material.

The setting is an African country during a period troubled by an uprising. In a farming region home to one of the rebel chiefs, Maria, a staunch and brave white woman, refuses to relinquish her coffee crop and to see the danger to her family that such an attitude provokes. For her, giving in is proof of weakness, cowardice.

In this plantation, which has nourished three generations of whites, AndrÃ©, her ex-husband and father of their teenage son, is concerned about Mariaâ€™s blinkered outlook, her stubbornness and pride. He decides to organize, without her knowing, the familyâ€™s escape and its repatriation in France.

AndrÃ© no longer believes in the value of coffee. He has remarried with a young African woman with whom he has a son, and for whom heâ€™s willing to do anything â€“ even betraying Maria by putting his fate in the hands of the mayor of the neighboring village. He believes heâ€™s the mayorâ€™s friend, but he doesnâ€™t understand, could not even imagine that the mayor is implicated in the conflict, that he opposes the rebels, and has other things on his mind than saving this poor white family adrift, so amazingly cut off from reality.

Neither Maria nor AndrÃ© are aware that a rebel officer with a price on his head is hiding in their very plantation. In the thick forest that spreads beyond the road bordering the territory, a small gang of child soldiers, that survives by plundering, lies in wait.