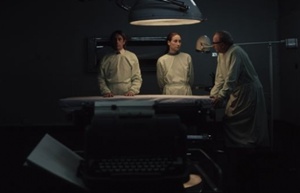 One of the greatest surprises of 2008 was the powerful Tony Manero. He broke out with this film in a really big way internationally. Now his next film is called Post Mortem. Tony Manero was a story of a serial killer obsessed with the titular John Travolta character in the midst of political upheaval and slaughter in 1970s Chile, the film was a dramatic tour de force that used the absurdity of its title characterâ€™s obsession to fuel potent satire and commentary on Chileâ€™s recent past. Tony was something outstanding and not to be missed.

Larrain is now almost ready with Post Mortem. Here is the synopsis:

Mario, 55, works in a morgue typing autopsy reports. In the midst of the 1973 Chilean coup, he fantasizes about his neighbor, a cabaret dancer, Nancy, who mysteriously disappears on September the 11th. After a violent Army raid on her family’s home, he hears about the arrest of her brother and father, a prominent Communist and Salvador Allende supporter. Troubled and madly passionate over the loss of his would-be lover, Mario begins his frantic search for Nancy.

Allende’s government has been overthrown and people are dying in the streets. The Army seizes the morgue and numerous corpses pile up, but Mario can’t get his mind off of Nancy. He carries out his job, thinking he might find her among the dead, in the silent hope that she is alive in a hospital somewhere. Mario walks through the streets like a ghost and one night, to his great relief, he discovers Nancy hiding in the attic of her home. He is delighted, feeds her, and fear prevents her from leaving her hideout.

Then, from the military officer now in charge of the morgue, he receives an unexpected order – to go to the Military Hospital and write the autopsy report on an extraordinary corpse …

There will be an extended trailer that will be shown at the Berlin Film Market and it is truly going to be compelling.