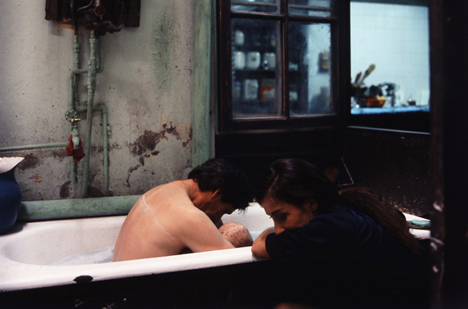 Tony Manero: The End of Form The envisioning of the anti form is what this film tries to embark on. Films like Martin Scorseseâ€™s great masterpiece The Taxi Driver is one such example. But for those who missed the power of his older limited characters that transcended the cinema screen to create unique caricatures of their society. Your in for a treat in the Pablo Larrain film Tony Manero. Society has changed them forcefully molded because of the dictates of money, power and fame. Raul is one such character whose fame addiction takes cinema into its ebbs of repulsion. His characters will be subjected new studies in character development.

We are left with so many questions at various stages of this film. But their answered with controlled dexterity that will leave it difficult to be watched. What does Raul signify to us? Is he really worth our time? Will he reach the end of his quest? One of the memorable moments in this movie is when the lady asks him about his profession and he simple says Show business. It is easy for him to say but what it signifies is totally harrowing. I remember sitting backing and releasing myself to the dictates Scorsese took me in Taxi Driver. But in Tonyâ€™s case it is more of a forced pull. He wants you to see him but not for what he is. Just watch him that is all he asks. Watching Raul look at his idol Tony Manero like it is more of a sexual desire. It is like a need that will not be able to overcome easily. A need that will make him forget the consequences of his actions.

The film is not shy of some of its political context regarding the former Chilean leader Pinochet. There are no direct digs at him. Nothing is really taken seriously by the character or the director. Everything seems to simmer for him in the background like some of the shots of his actions. His narcissistic attitude to the world is more liberating than it looks. How many of us have wanted to do something totally for the love of it and we loose our way in it? It might have started as something innocent but with our knowledge it manifests. Manifestation is the concern that the directors doesnâ€™t even care to address. Raul is played by Alfredo Castro shows a lot of restraint anger he has to all things around him. Naked another film that also addressed these digressive issues of social and sexual inadequacy, but the comparisons seem to just come and go. The film seems to not dissolve itself into these comparisons. There is certainly a huge room for creation over here. The moment Raul runs in the beginning from everything and at reaches a sort of self gratification for his needs is something to be felt.

There are also some lesser characters who aid Raul in his indescribable actions. One of the many is the woman who is in love with him. Her daughter is one of the filmâ€™s disturbing catalysts. Her admiration of Raul is something that feels incestuous for the loss of her own. The daughterâ€™s boyfriend is one of the targets of Raulâ€™s persecution and jealousy. The scene where he leaves his waste on his white suit is something reminiscent of Pasoliniâ€™s greatest scenes. It will leave you on the edge of your own restraint. Loads of you might even walk out. But the director is not throwing in cheap tricks he is decimating a culture. So donâ€™t miss it for anything. It is the reason we go to the cinemas for a need to loose ourselves but what price will the character have to pay for our indiscretion.