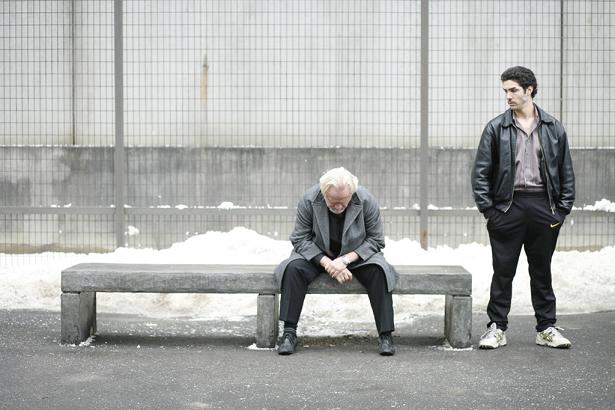 Thoughts on A Prophet At times we are stomped by the transgressions of many characters. We look for answers of our lives in thrillers. Hollywood has kind of made us starving for cinematic realism. Just the other day I saw GreenZone and thought that drama killed the film. The dialogs that curtail some of the hidden emotions donâ€™t really need to be mouthed. It is not the case in A Prophet where a man takes a journey so that he can create himself to be something he is not. It is often taken subject of self realization. It has been handled by loads of director but there is something surreal going on in this film.

The story starts off with Malik: a man who can neither read nor write and tries to find his place in the stream of culture seen in the jails of France. Yes there is ample cinematic license taken over here but at a price that makes it worth a mention. Malik tries to mingle with the Corsican Mafia and then the Arabs and begins to trace out his identity. He is made to kill someone with a razor blade in his mouth. It is then that his toughness begins to diminish and he enters into a surreal thought process. The director at this point has taken the film at audience grabbing pace. He begins to slowly drift with the presence of the man Malik killed around him. This living conscience Reyeb: the man Malik killed speaks his thoughts and reads out important passages to him. These are the text Malik has slowly started to read by learning from prison. Malik is not really plagued by Reyebâ€™s presence but it is more to do with his guilt. Guilt Malik is less conscious of.

The director takes various cues from real life politics to mirror the politics in the jail. The corruption is a little too farfetched in many of the jails over there. But the presence of this cultural divide is keenly observed. The director works out a path to show many of Malikâ€™s phantasmagorical visions. These donâ€™t stop with just the presence of Reyeb but also various premonitions that make for some perverse images.

Malik is a man who takes account of the situations he has been put in and makes the most of it. He is not aware of what is moral. He makes choices because of the harsh realities surrounding him. The strongest images from the film include the point of views of Malik trying to learn to read and write. Eventually it develops his intelligence to manipulate many of the prisoners to his direction.

Men are very frugal beings. They are easily swayed by mentors. Drawn to them because of the interactions they have with great people. There is a sleepless rage of blindness that overshadows them when they are faced with men built on their own truths. This is what is witnessed on screen in the case of Malick Jacques Audiard has brought forth some of the most powerful leading men in French Cinema in recent times. His work with Vincent Cassel in Read My Lips made him a household name in festival circuits. Much of his deviation from the commercial aspects of cinema is to do with his father Michael Audiard who is was also a notable filmmaker.

From here on I will try to trace out the path leading to A Prophet with examples from Audiardâ€™s previous films. Read My lips worked on office politics; tracing out some of the more intricate relationships that exist in the office space. The film stars the formidable Emmanuelle Devos. She plays a deaf secretary who is drawn to a con man played by Vincent Cassel. The visceral relationship is filled with insecurity, disrespect, love and revenge curtained in a thriller format. The central theme is played out in the unwelcoming offices and dirty underworld paralleling it.

The film Sur mes levres (Read My Lips) was well received by the critics for its stark screenplay and the fortitude shown by the actress who played the central character. The most striking thing is the introduction of each of the character revealing a trait that symbolizes their handicaps. But the characters begin to long for each other after a while. They become inseparable and eventually get lost in the cycle of crime and lust. The film feels like a Bonnie and Clyde played out in the office. The director was taking cues from the legendary film and making contemporary changes to it. The next film was De batter mon Coeur sâ€™est arÃªte (The Beat that My Heart skipped). This film shifted from the not so comfortable world of office spaces to the relentless world of real estate deals. Crime always takes a sardonic turn in most of Jacques Audiardâ€™s films. In this film it was Romain Duris who channeled the character to dizzying degree that made him an international force to reckon with. His moment of the reckoning in the film is really powerful and the tears pour out without the usual reaction. It was a tighter film than his last. But the approach crime is still very unique in this as well. One of the most striking features of his films is the female characters in his films. They have been muted in many indirect ways. For instance in The Beat there is a Chinese woman who tries to teach Romainâ€™s character how to play the piano but does not know how to communicate with him. It is an underlying disability which we encounter in our daily lives when we make false interpretations at various points of our life. Communication is also one of the reasons why Jacques opted for this medium. He sort of gives voice to the voiceless and misled.

Some of the exchanges by characters in Jacques in his films are really unique. The look Romain gives to his Chinese teacher gives us a sense of a higher understanding between the two with the sound of silence playing a major role.

Finally Jacques arrived at his most challenging film yet. A Prophet is more of an image building film. The iconic images of characters from Godfather, Scarface and Citizen Kane are also offer examples of image building exercises. In this case it is the Arab man who is trying to find his place in the jails of France. But in the recess of his films there are moments of crafting the amoral man. It is this striving that has made Jacques an apolitical writer of films.