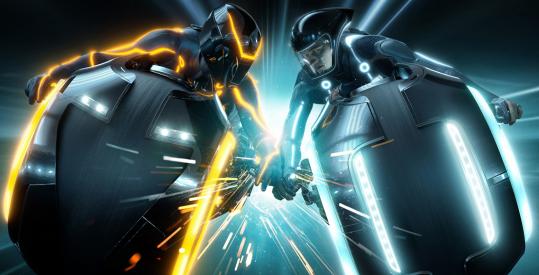 The Sequel picks up from when TRON, Kevin Flynn (Jeff Bridges) has gone missing after quickly taking over ENCOM and making it into an unbeatable powerhouse in the late 1980’s. Leap forward over two decades later, and ENCOM is still at the top of its game even without its leader. But its main shareholder, Flynn’s son Sam (Garrett Hedlund), wants nearly nothing to do with it. On the encouragement and curiosity of an old friend, Sam returns to his father’s old office to investigate a mysterious page. He gets zapped into a redesigned ENCOM system, and quickly realizes the dangerous predicament he has thrown himself into.

Much like the original film, the storyline of TRON: Legacy is messy and all over the place. Action sequences seem to be the only real element connecting every story sequence together. Certain events and scenes happen or are alluded to with the obvious intention of being important later on, only to serve next to no point at all. An allegiance switch late in the film is of particular standout, because it means absolutely nothing seconds after it happens.

The acting is hit and miss as well. Hedlund has the right amount of ignorance and swagger to make Sam a great character, but his dialogue, delivery and chemistry with anyone else is near pitiful. He just does not have what it takes for the audience to take him seriously as a lead, and to make his journey compelling. Olivia Wilde fares significantly better as Quorra, who spends the majority of the film either saving Sam or asking him about the mysteries of the outside world. It is that kind of role that could have been performed by any gorgeous young actress, but Wilde makes the character her own, giving her a life and personality that is nearly devoid from the actual story itself. Bridges does not get a whole lot to do, acting both as the older Flynn and the voice of the mostly computer generated Clu , but still shows why he is such a great actor. I found his work to be second only to Michael Sheen, who steals the entire movie in his small role as an over the top David Bowie-like club owner. But where the film stands out, and the real reason anyone should even consider venturing into a movie like TRON: Legacy, is in its visuals. First time director Joseph Kosinski has taken Steven Lisberger’s unique vision and, alongside his incredibly talented crew, has re-imagined just about everything to look even more incredible than it did in 1982. If you found the original film hard to watch or just laughed at it’s almost antique like digital design, than you will simply marvel at what is shown on screen here. The light cycles are majestic and fluid. The costumes and movements within “the grid” are astonishing. The action and battle scenes are astounding. The digitally replicated look and feel of Clu as Bridges in his early 30’s is simply mind-blowing. There are instances where the effects are imperfect, but seeing the visuals updated to look this ridiculously unbelievable is worth the price of admission alone. The 3D effects are not nearly as much of a revelation as they were in Avatar, but they help add a nice layer of creative depth to the film.

The score, created by Daft Punk, is also of particular note because of how much it adds to the film. This has to be one of the best scores this year. The techno, electro pop sound gives many of the film’s scenes a more epic and pulse-pounding sense of life that no other score could have delivered. It is inspiring, and helps practically add a sense of authenticity to the film. It simply would not have worked nearly as well had it been done by a traditional orchestra. And it just keeps getting better and more legendary as the film goes on.

Much of the criticism has been against the script, but I have to ask, what if they added more story into this, and made it 30-40 minutes longer, these same people would criticize saying the film is too long. Or. maybe they just loved it but angry because the story hindered the true potential of what the movie could have become. Either way, its worth taking a trip inside the grid and experience the madness it has to offer.