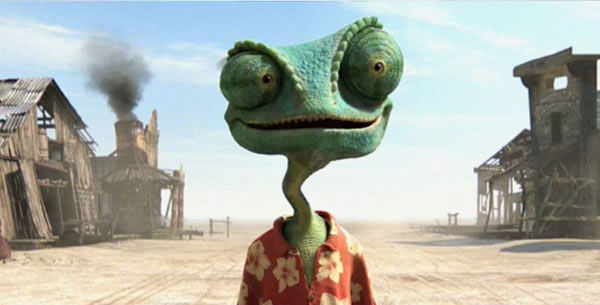 I would even say this is more a film for grown-ups than for kids, though kids will certainly get a kick out of Rango, a colorful chameleon energetically voiced by Johnny Depp. RANGO is that sort of animated film, where the writing and situations are funny enough that it might turn out to be one of the best animated films of the year.

In a world like ours (but where intelligent talking animals live side-by-side with humans) the chameleon who comes to be called Rango (voiced by Johnny Depp) would like to be an actor. He dreams of a life in front of a camera. Then his habitat rolls off the back of a truck and he finds himself stranded in the dry Mojave Desert. He wanders into the animal-run frontier town of Dirt. Swaggering into the saloon he tries to play the part of a Western tough guy. He brags that he killed a gang of seven outlaws with a single bullet. In a fight with a predatory hawk, Rango gets lukcy and kills the hawk. The people in the town now believe and want Rango as their new sheriff. Then, there is this whole water crisis and everyone more or less knows who is behind everything and who the bad guys really are. The voice acting in the film is truly outstanding and it starts with Depp’s fine work. Also contributing are Ned Beatty (Mayor), Bill Nighy (Rattlesnake Jake), Isla Fisher, Abigail Breslin, Stephen Root, Alfred Molina (Armadillo), Ray Winstone, Charles Fleisher (from 1988 Roger Rabbit) and Timothy Olyphant as the Clint Eastwood character no-named Spirit of the West. There is also a useful and very funny Mariachi band that pops up periodically to push the story along. Director Gore Verbinski is known best for his Pirates of the Caribbean movies (with Depp) and he really gets to go all out on his visual style here. He is helped along by George Lucas’ Industrial Light & Magic (ILM) and their first foray into animation.

Now, I thought Johnny Depp’s voice brought this incredible dimension to his character but somehow I felt there was something missing. I felt the first half of the story was funny with good dialogues and amazing visuals but the second half did not capitalize on that and fell a bit flat mainly because it was predictable and everyone knew what was going to happen. I thought they should have made the ending more grand and epic. There was just a small moment where you felt emotionally attached to Rango, but that was really really brief and before you know it, its the usual happy ending. This movie could have been one of the best animated films of all time. I think it is a huge opportunity wasted.