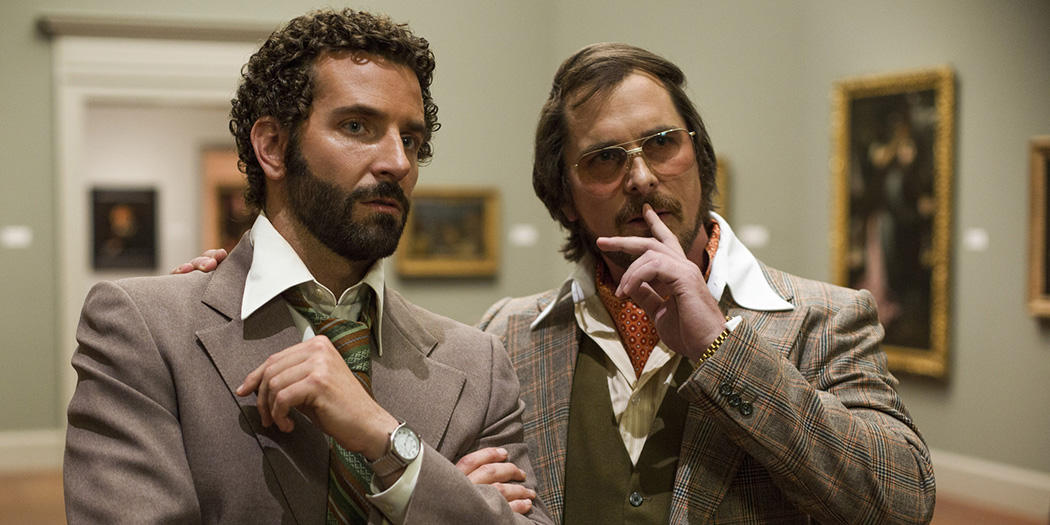 American Hustle captures the look and feel of Hollywood films of the seventies and can boast of some of the finest acting performances of the year. The film starts off with two scam artists in cahoots with each other and quarreling over silly things in a funny way which sets the tone for the rest of the film.

Tthe story is loosely based on the Abscam case of the late seventies where an FBI sting operation, partially directed by con artist Melvin Weinberg, used fake Arab sheikhs to convict a New Jersey senator, six congressmen, and the mayor of Camden for taking bribes. Coming not far after the political fallout from Watergate, the dubious credibility of the Warren Commission, and the illegal and unpopular Vietnam War, the scandal further contributed to the decline of the American people’s trust in their government.

American Hustle is filled with a relentless energy that does not flag throughout the film’s 138-minute length. We first meet middle-aged pot-bellied Irving Rosenfeld portrayed by a bulked-up Christian Bale. Irving has a dry cleaning business which is a front for his lucrative art-forgery scam and his illegal loan shark “business” where he promises to get desperate people the loans they need, then bilking them out of their money without providing any service. Things look up temporarily for Irving when he falls in love with Sydney Prosser (Amy Adams), a stripper who has reinvented herself as slick con artist Lady Edith Greensly, an upper crust British executive. When one of their clients turns out to be FBI agent Richie DiMaso (Bradley Cooper), however, they are threatened with jail time unless they agree to use their scamming abilities to work for the bureau. Richie is an ambitious fellow and his only goal is to go up the ladder in the bureau and he is planning towards it. The idea he comes up with centers on rebuilding the Atlantic City waterfront to make it a haven for casinos and organized crime. To this end, DiMaso sets a trap to bring down the popular but corruptible Mayor of Camden, Carmine Polito (Jeremy Renner), along with a few Congressmen and some upper echelon crime bosses.

As the film goes on, the characters become more over-the-top and the plot becomes more and more convoluted. By the time it ends, everyone’s veracity is so compromised that it is hard to tell the difference between the swindler and the victim. Christian Bale does an excellent job leading this ensemble as the con man who wants business. Bale dedicates himself to this performance by having gained weight and giving Irving an interesting looking comb over hairstyle. With this role, Bale shows us a guy who does his best to keep his cool despite what he’s going through. Amy Adams knocks her role out of the park and does some impressive work not just as a con artist tricking people with her British accent, but also keeping us on our toes in making us unsure if she is loyal to Irving or Richie. Bradley Cooper is the best in show here as FBI agent Richie DiMaso. As Richie, Cooper showed us how much he has grown as an actor. Jennifer Lawrence is a riot as she pulls off the role of a 1970’s New York housewife. Lawrence does so by using the mannerisms used then and how she gets nosy into her husband’s business. Jeremy Renner does some nice work as the mayor who wants to do what he can to bring business to Camden and be able to get the economy going.

American Hustle is a complicated mosaic of cynicism, questions of credibility, legitimacy and the art of illusion tempting desire. It has some of the finest performances you will see this past year.