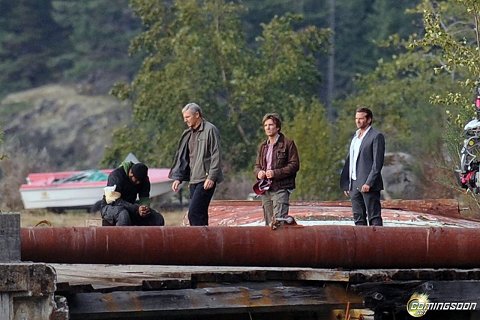 Liam Nesson joins Three Days and Pics from A team Paul Haggis next films seem to be pushing for some credibility. His last film didnâ€™t get its due. But once again I would like to reiterate that he is not a filmmaker but an amazing writer. Now The Next Three Days gets Liam Neeson doing a cameo in the film.

The film will be produced by Lionsgate and tells the story of a woman imprisoned for a murder she claims she didnâ€™t do. Now her college professor husband decides to get her out of the prison. So surely that will be played by Russell Crowe. Liam Neeson will have a cameo and will play a veteran of sorts. He has done several escapes from prison and has even written a book on the subject. He will advice the husband on how to take his wife out of prison. Paul Haggis has written the script and also directs it.

Liam Neeson can also be seen with silver hair in the A Team. He seems to be getting a lot of work even after the sudden demise of his wife. That will be an out and out action flick. I think after the Taken there have been several offers for him to do action. But it is because of his work in Batman Begins that his career has gone to the top. Here are some pics from the film.