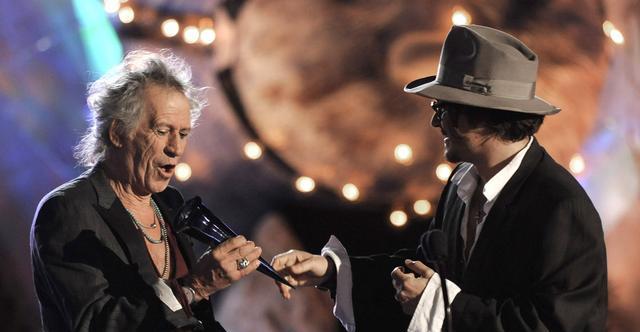 Johnny Depp is all set to get his hat on this week for Alice in Wonderland. I just got to see it today it was not all that great. But Johnny Depp is something to watch out for. So when Tim Burton and Johnny Depp were talking to Jonathan Ross on their next couple of projects. Johnny Depp hinted on the Keith Richards biopic called The Brave.

“It’s a thing we’ve talked about for a number of years now,” Depp explains to Ross. “We finally had a moment, the two of us, to get together and do like a first installment if you will. So basically, all it is is exactly what Keith and I have been doing over the years. Just sit around in hotel rooms, gabbing, having a drink and we documented it. So it’s something we’re doing together and we did five days. It went extremely well, incredible.”

Johnny Depp has put the documentary on hold because of his work on Florian Henckel Von Donnersmarck film called The Tourist and will likely take up the documentary after the shoot of that film. But his schedule is also packed with the next Pirates film shooting in summer.

The project will speed track the moment Johnny Depp gets free time from all the busy shooting for the whole year round.