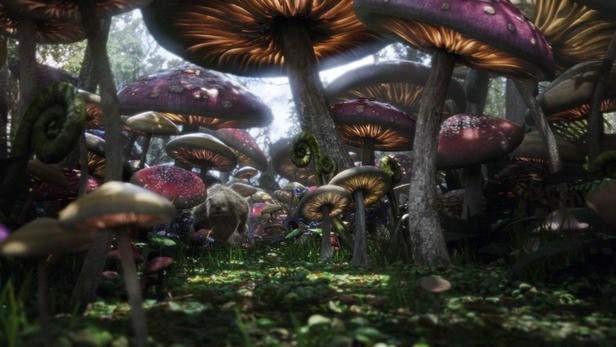 Disney is pushing for this film to be the next big thing. It is surely going to be something unforgettable. These are images which come with description from the writer of the film. UNDERLAND, says screenwriter Linda Woolverton, is a part of the earth. “But it lies somewhere far beneath our world. The only way to get there is to fall down a rabbit hole.” It is the same fantastical land that Alice visited as a child, but she misheard the word “Underland” and thought they said “Wonderland.” Alice, now age 19, heads back down the rabbit hole and though she has no memory of her previous adventures in Underland, she is reunited with its inhabitants, including a swashbuckling Dormouse, an off-his-rocker Mad Hatter, a grinning Cheshire Cat, a caterpillar called Absolem, a beautiful White Queen and her spiteful older sister the Red Queen. “Time has passed,” says Woolverton. “The Red Queen rules the whole land. It’s under her thumb. And the people of Underland need Alice.” Underland has come upon hard times since the malevolent Red Queen took over the throne. It is, however, a truly wonderful land, which might explain why the girl who mistook it for Wonderland has been called upon to help return it to its glory. But, says Woolverton, “Underland has always been Underland since the Beginning, no matter who sits on the throne. It will remain Underland until the End.” ALICE (Mia Wasikowska) is a 19-year-old woman contemplating her future. An independent soul, she feels trapped in the narrow-minded views of women in aristocratic Victorian London. Alice Kingsleigh is uncertain how to balance her dreams with other people’s expectations. Following the death of her beloved father, she attends a garden party with her mother and sister, although, unbeknownst to her, it’s been planned as her engagement party. Just as the arrogant and dull Hamish Ascot proposes to her, Alice spots a White Rabbit wearing a waistcoat and pocket watch scurrying across the grounds. She rushes off after the furry fellow, tumbling down a rabbit hole and into Underland, a place she first visited as a child (and called Wonderland) – though she has no memory of it or its inhabitants. Alice nevertheless reunites with her childhood friends, including Absolem the caterpillar, the Cheshire Cat, Tweedledee and Tweedledum, and of course, the Mad Hatter – and seeks her true destiny. “In the beginning, Alice is very awkward and uncomfortable in her skin,” Wasikowska says. “So her experience in Underland is about reconnecting with herself and finding she has the strength to be more self-assured in figuring out what she wants.” THE MAD HATTER (Johnny Depp) doesn’t just wear his heart on his sleeve – his ever-changing moods are quite literally reflected in his face and his attire. He’s been anxiously awaiting Alice’s return and is, arguably, her one true friend, believing in her when nobody else does. He is fearless, going to great lengths to protect her at his own risk. Once the proud hat maker for the White Queen, the Hatter has been affected by mercury poisoning, an unfortunate side effect of the hat-making process, and isn’t altogether well. CHESSUR, THE CHESHIRE CAT (voice of Stephen Fry) is a dapper tabby with the ability to appear and disappear. He is all calm, casual sensuality with a seductive grin that masks his cowardice. It’s the cat’s disembodied head that first appears to Alice in Tulgey Wood after she’s been attacked by the vicious Bandersnatch. He offers to purify the gashes on her arm by licking them. Alice declines, although she allows him to lead her to the Hatter’s Tea Party where the Hatter blames him for deserting them on the day the Red Queen seized control of Underland. Using his skills and the Hatter’s coveted top hat, Chessur later finds a way to redeem himself. THE MARCH HARE (voice of Paul Whitehouse) hosts the Mad Hatter’s Tea Parties at his Hare House. Paranoid, anxious and slightly insane, he constantly wrings his paws and ears and has a thing for tossing teapots and other items. He has a penchant for cooking and is one of the few Underland inhabitants to escape the Red Queen’s clutches all together.

Here is the source of the article