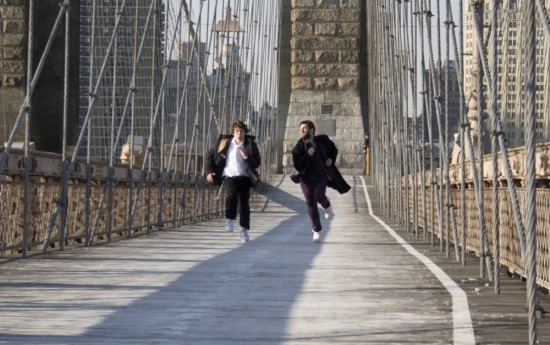 After his great turn in Adventureland Jesse Eisenberg has been playing the same card for his last couple of movies. Adventureland was a film that did something really great for Kristen Stewart who showed her prowess as an actress. Now Jesse is still trying to find his footing and has a release called Holy Rollers coming soon where he is dealing in the D word.

Hollywood is going through a Godfather fetish in the last couple of years. They are trying to make the absolute great underworld film. They are bringing fresh new sensibilities to it. But who really cares for it now. There are really no stars like in the old days. But even to achieve as big a canvas as Godfather you need sheer will. But why will you even try a Jewish drug peddling business. What is in it? The face of Jesse Eisenberg shows you how stupid this undertaking is going to be.

But there is one single thing that Jesse can pull off really well a stoic innocence. But this wonâ€™t be enough to weave a film around. That canâ€™t be the only underlying theme throughout the film.

The film tells the story of inspired events. The reality is just thrown out the window with that. It was a time when Hasidic Jews were recruited as mules to smuggle ecstasy from Europe into the United States. Sam Gold is one of those fairies who ended up peddling. He was a man studying to be a Rabbi. Now there is another charming neighbor played by Justin Bartha who will be something to watch out in the film. He sees this resistance and uses the boy for his selfish gains. But all this happens in the foreground while something begins to brew slowly around Sam. He slowly begins to spiral down into a detrimental lifestyle. Now something interesting happens when Sam leads to point where he questions his own paths. The one towards God and he runs away bringing the last operation into an issue.

Holly Rollers will be unlike any of the other Independent films coming out of Hollywood. There is really nothing really fresh out there. Everything seems to be recycled and stocked up. It is getting really frustrating the viewer. So hopefully will Indie get some face value after the release of this one?