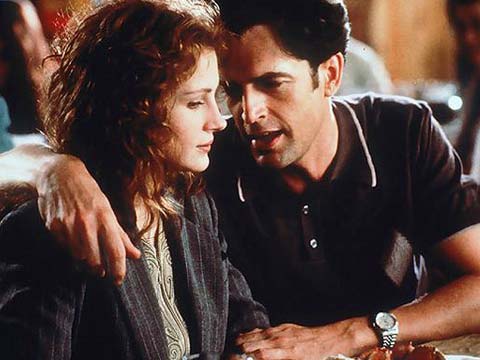 Food writer Julianne Potter (Julia Roberts) panics when she receives word that her longtime platonic pal, Michael (Dermot Mulroney), is finally getting hitched, to a debutante named Kimberly (Cameron Diaz). Realizing her true feelings for Michael, Julianne enlists assistance from her gay companion (Rupert Everett) and sets out to sabotage the wedding, making a last-minute play for her man.

This film totally took me by surprise. Here I was expecting, a really cheesy, dumb, and unfunny romantic comedy chick-flick. But as gay as I may sound I actually liked this film.

What totally took me by surprise was the fact that the screenplay was so well-written, and a lot smarter than some Hollywood romantic comedies. The film has plenty of funny moments, that will make you laugh along, but it’s also got a darker tone to it as well. There is some themes about how lying, and jealousy can end up making you a terrible person than you turned out to be, and it will always get you into trouble. And you think that just because Julia Roberts is in the main role, she has to get the guy, when it’s a lot more difficult than that.

The problem with the film is that it’s narrative just fails in the middle. The first act kept the comedy going, and going, but then out of nowhere it just stopped, and everything started to slow down. I wish it kept up its pace throughout the whole movie, cause that second act was really bothering me. Also, the film revolved around Mulroney and Roberts being “best friends”, but I know best friends, and that is not how they act. These two are constantly flirting, hugging, dancing, and coming close to actually kissing, but at the end of the day their still “best friends”? Sorry, but best friends, don’t constantly get it on with each other.

There is also a lot of fun little musical numbers, and the film kind of gets you in the mood for a wedding. I have only been to two weddings my whole life, and they were so bangin’, and this film had me wanting to have another one. Also, the great soundtrack, which features some good song numbers, really gets you going.

The four main characters are what makes this film superb. Julia Roberts starts out as a character that is such a bitch, and cruel, that it’s hard to see how anyone can like her, but due to her charm, and vibrant personality she always brings to screen, she really does make it work here. Dermot Mulroney is also good here, and he not just uses his looks for an attractive performance, but also his “cool-guy” act, and it always works. Cameron Diaz is pretty funny here, playing a character that we feel so bad for cause she is so nice, but yet she is so funny, so she isn’t watered down by constant pity. The best in the whole cast is Rupert Everett who just steals this movie right from underneath the gown(see what I did there). He is so hilarious playing this gay guy, and every time he is on screen, he brings that hilarious British energy to the screen, and makes your ass off, while he’s dropping all these one-liners. All four main characters are good, mainly because the film is not afraid to show them being stupid, and making them utterly believable.

Consensus: My Best Friend’s Wedding had a problem with its middle act, but is revived back up with its hilarious performances, realistic screenplay, and overall happy, and fun feeling to it all.