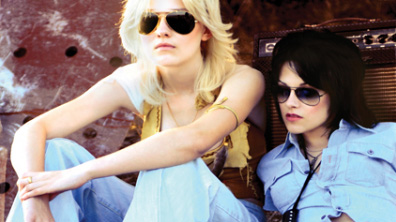 The 2010 Sundance film festival will have loads of premiers starring Kristen Stewart in the main or supporting roles. We have already spoken about Welcome to Rileys where she will be playing a stripper.

Now the next one is The Runaways. She will be starring alongside her co star in Twilight Dakota Fanning. Kristen Stewart will be playing Joan Jett and Dakota Fanning as Cherrie Currie. The film also co stars Alia Shawkat, Scout Taylor Compton and Michael Shannon as the abusive manager.

Of all the bands of the 1970s very few would have missed out on the Runaways. This is particularly due to their music but more so to the fact that they were teenage girls whose wild and reckless lifestyle was the stuff of legend.

The story focuses on the guitarist and vocalist duo Joan Jett and Cherie Currie as they navigate a rocky road of touring and record label woes, the film chronicles the bandâ€™s formation as well as their meteoric rise under the supervision of an abusive manager.