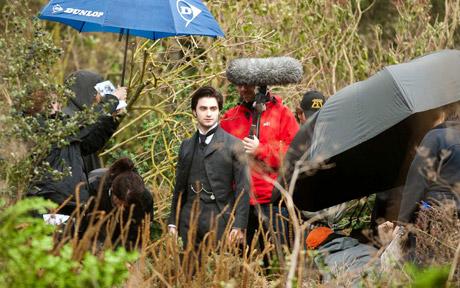 Daniel Radcliffe stars in horror film directed by James Watson called The Woman in Black. Radcliffe plays a young lawyer visiting a remote English town that holds many ghosts secrets. The film is based off the Susan Hill novel of the same name and was adapted by Jane Goldman.

Radcliffe will next be seen in the final Harry Potter films with the first part release on November 19 th. The second part will be out next year.

Set on the obligatory English moor, on an isolated causeway, the story has as its hero one Arthur Kipps, an up-and-coming young solicitor who has come north to attend the funeral and settle the estate of Mrs. Alice Drablow of Eel Marsh House. The routine formalities he anticipates give way to a tumble of events and secrets more sinister and terrifying than any nightmare: the rocking chair in the nursery of the deserted Eel Marsh House, the eerie sound of pony and trap, a child’s scream in the fog, and, most dreadfully, and for Kipps most tragically, the woman in black.