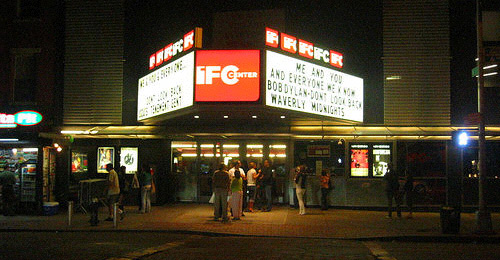 Here is a great chance for aspiring filmmakers to get their hands on some dough and some machines. So that they can make their film dreams come true. Here is the press release below and you can go to the Youtube link to find out more.

The Time Warner Cable Short Film Contest in association with IFC calls on aspiring filmmakers across the country to showcase their talents in creating their own short 2-to-5-minute film. To enter, contestants must upload their short film entries to Time Warner Cable’s new YouTube channel (www.youtube.com/timewarnercable).

“Time Warner Cable connects people to the content they’re passionate about,” said Marissa Freeman, Senior Vice-President of Marketing Communications “Providing aspiring filmmakers with the opportunity to actually create the content – that takes it to a whole new level. We are really excited to see the entries.”

A panel of expert judges will choose up to 25 finalists based on creativity, quality and content. Consumers can view entries and vote for their favorite on Time Warner Cable’s YouTube channel from November 9th through November 16st. A combination of the expert panel and online voting from the public will determine four Grand Prize winners, which will be announced in December. The panel of judges includes indie filmmaker Joe Swanberg (“Hannah Takes the Stairs”), horror film director Ti West (“House of the Devil”), IFC and Sundance Channel President, Evan Shapiro, and IFC News host Matt Singer.

“This is a great opportunity for aspiring filmmakers to showcase their work and experience the inner workings of the film industry at Sundance, a festival which annually helps discover and celebrate some of the greatest films and filmmakers of our time,” said Shapiro. “We’re thrilled to be working with Time Warner Cable on such a worthy initiative.”

Each of the four winners will receive a trip for two to the 2011 Sundance Film Festival, including hotel, air transportation and ground transportation. Additionally, the prize will include $500 spending money, two tickets to a film screening at the Festival, an invitation to an exclusive Sundance Channel VIP party, attended by select industry stars and executives, and a one-year subscription to Time Warner Cable digital cable and Road Runner high speed internet services.

IFC creates and champions authentic, original content that is “Always On. Slightly Off.” Since 1994, IFC has cultivated television programming that challenges the conventions of storytelling. Today, IFC continues to embrace content with an indie perspective. Original series – headlined by brand-defining scripted and sketch comedy – air alongside an extraordinary collection of films and cult TV shows. Long and short-form original content inspired by music, web, gaming, animation, news, and culture is available on multiple platforms. IFC provides viewers access to must-see festivals and events around the country, like the Film Independent’s Spirit Awards and SXSW. IFC.com features exclusive video, podcasts, blogs, news and reviews cultivated and written by industry experts. The network’s On Demand offering, IFC Free, gives fans the opportunity to watch select content from IFC whenever they want. IFC is a subsidiary of Rainbow Media Holdings LLC.