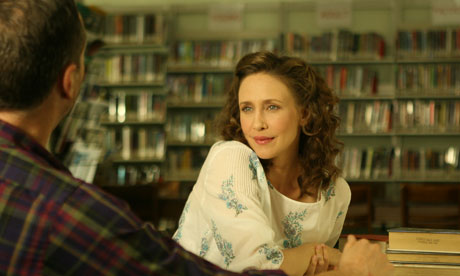 Vera Farmiga has joined the cast of Safe House Vera Farmiga has had a good year with the release of Source Code. She will be next seen in the Safe house. The film will be directed by Daniel Espinosa who will be making his English language debut with this film. The film stars Ryan Reynolds and Denzel Washington. The supporting cast will have Brendan Gleeson, Sam Shepard and Robert Patrick.

Vera Farmiga has also joined the cast of the film. Deadline has just said that she will play a CIA operative overseeing Reynolds character. She will be playing a role similar to the one in source Code but with a slight variation.

The plot in general has the young CIA agent played by Ryan Reynolds overseeing the transfer of a dangerous criminal played by Denzel Washington. When a group of villains destroy a CIA operated safe house, the facility’s young house sitter must work to move the criminal who is being hidden there to another secure location.

David Guggenheim wrote the script for the film, and then there were some rewrites. The original draft was solid with some crackling sequences but a slight dearth of personality.

The shooting for the film has been going on in full swing in South Africa for the last couple of months. The look of the film will be something to watch out for in the coming weeks. Tell us what you think of this additional casting to this film.