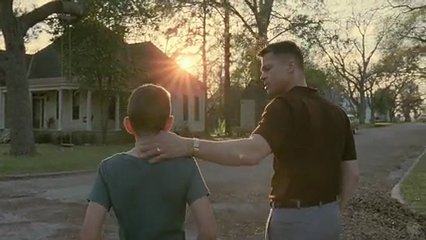 Tree of Life a Review ‘Someday we’ll fall down and weep. And we’ll understand it all, all things.’

On second viewing of this film it took me a while to get around writing about this film. Terrence Malick could breath easy after making this film with his persevering collaborators. Jack Fisk, Alexander Desplat, Emmanuel Lubezki, the kids, and Jessica Chastain will be able to reserve their names in the annals of cinema as an art form.

Their contribution and the rest of them who worked so tirelessly not forgetting the FX will be truly remembered after you have watched this film. It begins beautifully with the words from the Book of Job. A concise quote that brings together a questioning representation of the film. A death then precedes the poetry of images that seem to glide us on to the screen to guide us into the core of this narrative.

The massive edit of the of footage must have taken a toll on everyone involved in this film. It is still going through revisions and leaving us with a chance to see a promised six hour representation of this emotional film. Terrence still begs to differ to the common idiom of a final cut. He leaves a lot to interpretation and seamless consciousness. He does not compromise this religious provocation that he has instilled through his sparce filmography. Film is a living breathing creature in his eyes. He wants to share his vocation with us with various images that leave us wanting more. He is not sumptious with his provocations. He leaves it out their bare and at times unflinching. Gliding through emotions that are invested with so much care and sensativity has become a ritual in his films.

Does he look at us for answers?

What does he want from us as a viewer? When Mrs O’Brien calls out to the one above ‘My Hope’ it touches are very being. Images of the planets rotating while we live and breath through time are arresting visuals. He answers a very primal call that we all have to heed to. At times the call disappoints and also angers us. The call of a mother who has lost a child is unlike any explicable emotion that Terrence works on. The primal need for us to shun those we love. The feeling of death can cause such repressed emotions that are voiced through the customary voice overs we have grown with every passing film of his.

We have all asked for the return of cinema. There was an outcry by many critics after several chapters of the Cannes Film Festival did not produce any real masters like the yesteryears. Now when the oppurtune time arrived we are cold to it. The Messiah paradox still lives with us even to this day. We don’t want it to come. The time to accept an evolution has come. The outcry over showing someone pray on cinema has been thwarted by the maker. The Maker does not work on the rules dictated by people. The Maker is always in constant rebellion with himself. The Maker like Terrence challenges his own identity at several points. In the process challenging the very machinations of story telling.

Today Story telling does not need to exist. A narrative should suffice. It should work to provide questions that don’t need to be answered.

Our childhood cannot be broken down into seasonal phases. It cannot be addressed in a forum. It cannot be packaged, recycled or flushed. A filmmaker needs to reshape the very divinity of time and place for innocence to stand alone. Cinema’s platform has opened up with this event. The event will need to be reshaped again by another maker. It should not be stopped with this by just giving the film a title or a genre. It will go against the men who have worked tirelessly to shape cinema as an art form. An art form that is used to shape the very fabric of society.

Terrence has also made a significant evolution and broke down his own cinematic structure like his great predecessors Tarkovsky, Bresson and Bergman to bring in a new grammar for the medium. A film grammar that was void for that last couple of years. It is certainly a reason to rejoice. It is time for all those who wish to create, to break through the streets of film structure and make a whole new language. Take the process forward and don’t gimmick or even plagiarize. Film is still an infant that is what Terrence has shown us. The road does not end here but abstractly begins.