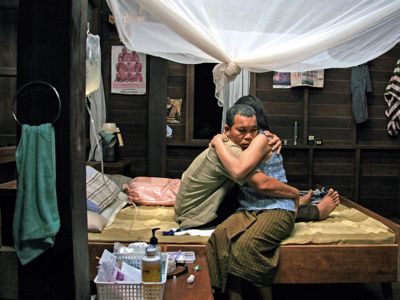 Apichatpong Weerasethakul is all set to ride the waves and dust of Cannes with his entry called Uncle Boonmee Who Can Recall his Past Lives. At this moment I would like all of you to take some time and watch Tropical Malady to understand the full scope of this director. He is a favorite among out more faithful readers. So he feels like he has never left the top of his game.

Uncle Boonmee is suffering from kidney failure. As an avid practitioner of Yoga, he is well aware of his body. He knows that he will die in 48 hours. He feels his illness must be related with his bad karma. He has killed too many communists, he says. Boonmee calls his distant relatives to take him back from hospital to die at home, a longan farm. There, they are greeted by the ghost of his deceased wife who has re-appeared to take care of him. His lost son also returns from the jungle in an ape-like form. The son has mated with a creature known as a ‘monkey ghost’ and has lived in the trees with her for the past 15 years. On the first night, Boonmee talks about his past lives that he remembers. On a second night, while the ghost wife is doing his kidney dialysis, Boonmee has a sudden urge to visit a place she has mentioned. So the group takes a journey into the jungle at night. It is full of animals and spirits. They finally reach a cave on top of the hill. Boonmee realizes that this is the cave in which he was born in the first life that he can remember. Then he passes away, taking with him tales that span hundreds of years.