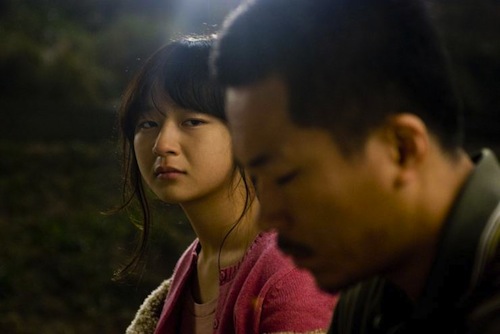 Breathless will make you truly Ik-joon Yang is a South Korean actor and director, and his gangster film “Breathless” is a marvel of Korean cinema. Yang wrote the script and plays the lead, and of course, he sat in the directo’rs chair as well. The theme: love and betrayal. The setting: Gangster life.

South Korean actress Kot-bi Kim plays the role of a sassy high school girl who is not afraid of standing up — and talking back! — to Yang’s tough-guy gangster role. While this film could have been set in Japan or Taiwan as well, where gangster culture is also part of the very fabric life, the South Korea setting gives it a special touch. Only in South Korea, one might say! It’s that good of a movie and the fight
scenes and violence are not for the tender-hearted.

And the language! Don’t get me started! This movie is so foul-mouthed, it’s beyond words!

The cast of characters include Yang as a petty gangster who works for a loan shark with a very short fuse, Kim as the high-school coed with some heavy domestic violence issues at home, and a half dozen other people with stories to tell as well. It’s not a pretty picture, and you won’t leave the theater with a smile on your face, and if you’re watching the DVD at home, be prepared for a very violent show.

Yang‘s directorial style is visceral, no-holds-barred, and it goes for your gut. According to Yang, the film is partly autobiographical, and that might be why the movie packs such an emotional wallop. It’s more than cinematic posturing, and it’s not Hollywood violence. This is South Korea on speed on celluloid! Ouch!

To make the highly personal film, Yang had to beg, borrow and steal (and use as many credit cards as he could to finance it), but the result was worth every ounce of sweat he used in setting the entire project up.

South Koreans were have seen the film were reported to be deeply affected by it, and due to the realistic depictions of domestic violence incidents in the story, many viewers were moved to tears, according to director Yang. While domestic violence is a terrible cultural malaise in the West, from Germany to the USA, it is especially violent in a society like South Korea, where women are considered second-class people.

The Korean-language title of the movie is “Shit Fly“, and the more gentle Breathless” title in English does not really do the film justice. “Shit fly” says it all: a man who would do anything to get through the day as gangster insect with little connection to the real world of love and feelings. Godard this movie is not. This is Ik-joon Yang all the way!