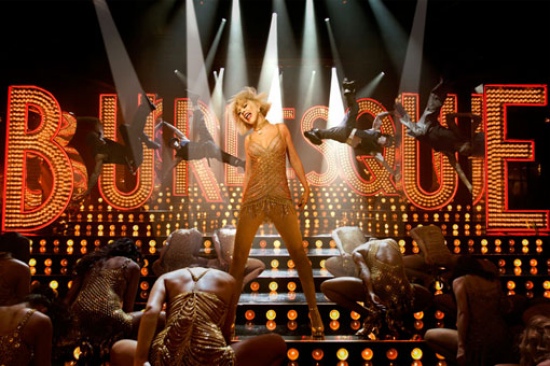 Why is Hollywood even attempting these horrible movies? In the name of musicals they get away with a lot. Here is another horrible example called Burlesque. It features a huge voice of the small girl played by Christina Aguilera. The film stars has a good cast in Cher returning to the screen after a while. We also have Kristen Bell, Cam Gigandet, Erice Dane and Stanley Tucci. No clue what all these people are doing this film.

Burlesque will be hitting the theater on November 24 th. Here is a small synopsis of the film.

Aguilera‘s Ali runs away from Iowa in search of fame and ends up waitressing at The Burlesque Lounge on the Sunset Strip. That is until Kristen Bell‘s headliner, Nikki, shows up tipsy one night and Ali must fill in. Ali helps turn what once was a lip-sync club into a singing-and-dancing revue after she displays her vocal fireworks onstage in numbers like “But I’m a Good Girl.” Cher is Tess, owner of a retro club who has a modern-day problem: She can’t make the payments on her over-mortgaged property. Together, Ali and Tess manage to transform the Burlesque Lounge into a success. Stanley Tucci is Sean, the lounge’s stage manager, a go-to guy for the gals and best friend to Tess.

This film looks a lot like the name of the film. There is no hope for this. We will not be following this one for sure. Over and Out.