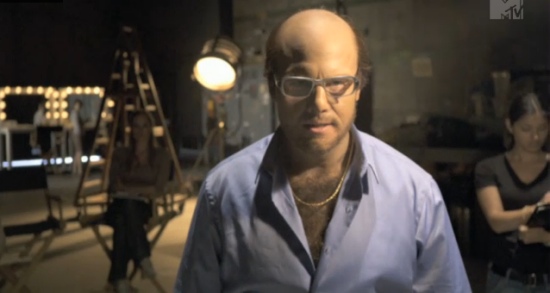 Tom Cruise is back as Les Grossman What people do to get themselves noticed? But what Tom Cruise does is just absolutely silly. He dresses as a man who he possibly cannot be and turns himself into an overnight sensation. In pop culture these days the MTV Movie Awards is a really big deal. It gives us a peak into the mediocrity surrounding a decaying industry.

Tom Cruise has been having some trouble the last couple of years because of his affiliation to the Church of Scientology. Now he has come back with a not so serious avatar which has made him get back some of his old glory by laughing at himself.

Now Tom Cruise is trying to get this new avatar Les Grossman a full fledged feature film. It will be focusing on the character and all the silliness he is associated with. Before that Tom Cruise will be busy promoting his next film called Knight and Day alongside Cameron Diaz. Cruise has been having fun after quite sometime with his characters. Tom Cruise has to owe all this new found fame because of Ben Stiller who really took him