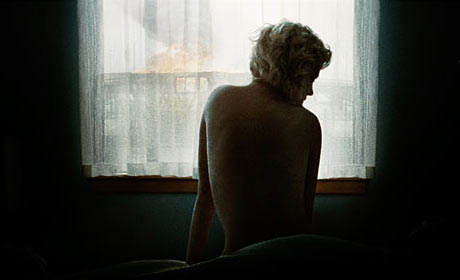 Sylvia played by Charlize Theron walks to window and exhibits her self to a couple of kids walking around in a park. Her expression is of an instability caused by an incident. The incident is featured next with a burning of a trailer in a desolate town. The story is all about to get jumbled up. Our concepts of time and plot are going to be tested. After careful reading of Sculpting with time there is a point where you feel Guillermo and Alejandro seem to be religious followers. But they created unique voice by making the form prescribed to be entertaining. Further reading will also tell us that the actors in those great films prior were also great personalities. They were not torn down by the dictates of the narrative. It is here where the clash seems to be a little too contrived.

Burning Plain is not bad movie to say the least. It is only in moments that it seems to transcend the writing to the final screen. The thought provoking performances are surely not to be put down. Charlize takes to this role with a whole lot of responsibility. She feels a need to reconcile with her characters intricacies. But it is not in Charlize Theron that we can pin the movie. But in the woman who plays her as a sixteen year old Mariana. Mariana played by Jennifer Lawrence is an astonishing find. Her role ranks up with some of the greatest debuts of our time. The actors in trying to furnish their spaces seem to lack a certain instinct that the director fails to provide.

The director faces with the same issues which I had with Paul Haggis. When a collaboration of writing and directing ends up on screen it seems a little flagellant. Guillermo in working around a process of liberation gets tied down by the limits of the form. We are expecting a lot more restraint on his part but he pulls it within the story. His work on Three Burials of Meliquides Estrada raised the bar of his achievements. Even here there are moments we see in the actors faces of some reassurance on the directorâ€™s style. But alas everything becomes an exercise on realizations. But not to take anything from the film it is still a great script. We are absorbed by its obscurities and channeling of hope. But hope seems to be wasted in a place that we all know to well and a family we donâ€™t seem to relate with. It is this lack of humanizing that makes this story loose out on greatness.