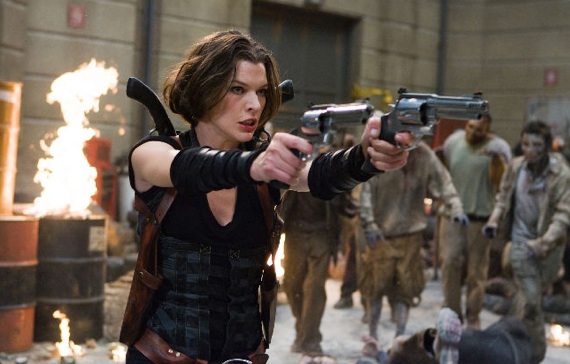 Although often dismissed as trite, farcical films, the zombie slasher subgenre is one of deep historical value and artistic merit. George Romero’s Night of the Living Dead stood as a landmark film, a genesis in horror and science fiction, with metaphorical ties to the Vietnam War. In the eighties and early nineties, zombie films were used to reflect the growing apprehension of the spread of AIDS. From the political to the environmental, and into the depths of human nature, zombie films have time and time again found ways to make significant statements on society. Even amongst the gritty, gory, and grotesque, there are still gems to be found in this overlooked cinematic niche.

Resident Evil: Afterlife is no such gem.

In fact, it is difficult to find any redeeming quality nestled in this mockery of cinema. The plot is filled with clichés—everything from cure-all medicines to bullet-time. There is even a moment when an enemy who common logic would suggest must be dead comes back to life—just for the purpose of giving the viewers one last scare.

Although the previous Resident Evil movies were no great feats, the newest chapter in the franchise presents a new low. The writing is tacky. During several scenes, Alice (Milla Jovovich) talks to herself for the purpose of giving information to the viewers. By contemplating her thoughts aloud, the movie lazily explains the whys and hows of the less-than-inspired plot. The acting is rushed and is completely void of chemistry between characters. Even the editing of the film is noticeably awry. The action scenes are chopped up in a manner that distracts the audience from the film. The moments between the action scenes are completely lacking in suspense. The viewer knows exactly when something is going to jump out of the shadows. The movie is also riddled with slow motion sequences that only allow the shot to linger for a longer period of time at the sub-par graphics.