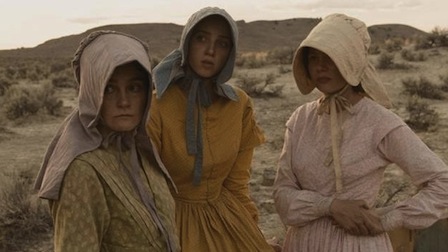 Meekâ€™s Cutoff gets a new look Ever since there was news about this film Meek’s Cutoff by Kelly Reichardt; we have been on it. It is a film based on the ill-fated Stephen Meek led expedition from Fort Laramie to Willamette Valley in 1845. The film stars Michelle Williams, Shirley Henderson and Zoe Kazan.

The first look gives us an idea of the desolate Oregon Desert where most of the shooting was done. Some of the cast also went through hell during the shoot.

“It was really hot when we got there, and then it got very, very bitterly cold and we were in these thin cotton calico dresses, and it was just grueling,” Kazan previously revealed. “We were working long hours every day. The physical conditions were really difficult. I think it will all be great for the movie because they’re supposed to be under extreme duress, but you know, it’s real.”

Paul Dano also had something to say about the shoot as well.

He said it was “treacherous. It was awesome, it was great. We filmed on real locations in the desert out in southeastern Oregon. From our motel we’d have to drive two hours down some dust path and we were working with oxen every day. The first week, people were getting heat stroke, and by week three the weather had changed and somebody got hypothermia. I think I can truly say about that film â€” people think the movies are nice things and are glamorous â€” this wasn’t.”

The rest of the cast include Neal Huff, Will Patton and Bruce Greenwood. The film will compete for the Golden Lion at this year’s Venice Film Festival and will release only next year.