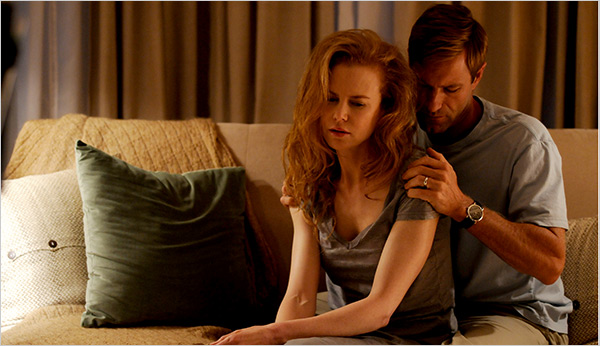 I just couldnâ€™t wait for the stills of this movie to be coming out. Now they are finally here. The film is surely going to be in the lines of Birth a movie I absolutely adored. John Mitchell seems to be drifting from his New York Bohemia and sinking his teeth into a powerful drama.

The cast was sort of tailor picked for Nicole Kidman. The film is adapted from David Lindsay Abaire Pulitzer Prize winning play. The film seems to be a sort of somber yet painful version of the recent Lars Von Trier titillating farce AntiChrist.

“This is a passion project for Nicole. The reason why Iâ€™m in the movie is Nicole. If she wants to work with somebody, then thatâ€™s what happens,” Eckhart told the New York Times Kidman had personally asked for Aaron Eckhart to star in the film along side her.

There were also several other revelation from Nicoleâ€™s end. â€œWhen I first responded to it, it was because I read it, and it was about grief, which fascinates me,â€ the actress explains. â€œLoss and love seem to be themes that run through my work. [This film is about] a marriage and the way that people fuse through pain, that you can either be pulled apart or you can come together. In the same way that â€˜Birth,â€™ a film that I did, was about loss of the loved one whoâ€™s your partner in life, this is the most profound loss, and itâ€™s the worst place to tread. And so my nature tends to be to explore something that Iâ€™m terrified of.â€

The film was initially said to be helmed by Sam Raimi who thank God opted out for Spiderman sequel. So this gave an opportunity for John who is no stranger to such loss and pain to take up this passion project.

The film has completed shooting and Fox Searchlight pictures will roll the film out in 2010.