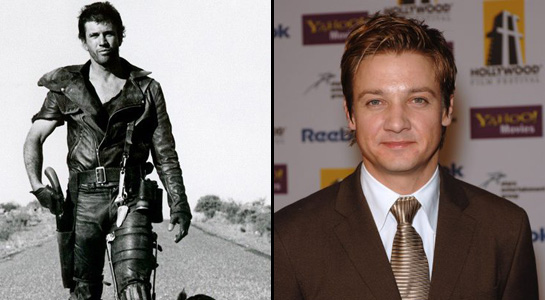 Modbee has featured an interview with talented actor Jeremy Renner recently. In the interview, Jeremy gives us few hints that there might be a fourth installment of the Mad Max series. He says “I’m also fighting to do the new Mad Max film with George Miller. That might be next summer. I’m screen-testing and meeting George Miller.” For those who have no idea who Jeremy Renner is, check out his brilliant performance in ‘The Hurt Locker‘ and if he seems like someone you have seen before, he played Colin Farrell’s best friend who turns against him in S.W.A.T.

Now, George Miller time and time again had said that the Mad Max 4 project was moving ahead but very slowly and since Jeremy is going to do a screen test for the role that Mel Gibson played back in 1979, the question is how much of this project has been developed. Also, George Miller had said a while ago that he might make a 3-D animation movie due to production constraints but all this info leads to a full motion picture.

Jeremy Renner is currently working in ‘The Town’ which Ben Affleck is directing. If he gets an oscar nomination, I am sure the whole world will finally know of this great talent.