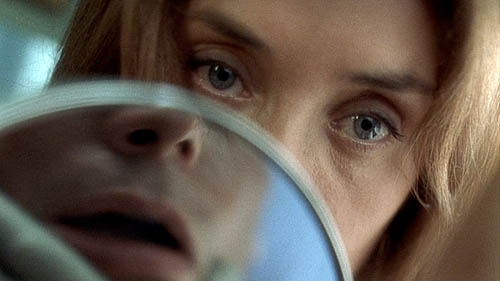 Foreign Shores: The Diving Bell and the Butterfly

Look at the way he pulls his eye back in this film. There was still hope in that singular eyelid it will take a lot of people to understand what he is going through. But Mr Bauby tries to leave it in a nutshell by giving us two examples of a Diving Bell and a Butterfly. He compares his state of things to a Diving Bell in the water. He gives his imagination a time frame of a butterflies life. This is what the whole story encompasses a case of locked in syndrome sort of, unlocked by the end of the movie.

The film will be very akin to what the youth of this world is facing right now. They have literally lost their imagination. This film can be used as a compass for changes to come in cinema. Julian Schnabel works to bring the story a rare authenticity by bringing in the people who worked with Bauby to re enact their parts. His wife is used as a physician who trains his tongue muscles to do specific functions.

The camera begins with a shot from Bauby’s point of view capturing even tears from this very cynical yet endearing man. The films has its lighter moments when a pair of workers come to install a phone for Bauby and ask the nurse why he wants a phone. She is very angered by this rhetorical question. They go on to say that he probably needs it for some heavy breathing. Bauby sees the humor in it , but she doesn’t. But his cynicism is one of the strengths of this film. The film has a lot tiny messages laid down in several places during the course of the movie. There is a lot of angst this person had to face before he was left in this state. He fell in love with someone outside his marriage who has a fascination for making under light of Mother Mary. She takes him to Lourdes for a dirty weekend. But does anything happen here that is not any of our concerns. The film deals more with Bauby imagination. At times it is stuck in several paradoxes making jokes of it along the way. But over time these jokes stop becoming funny. This is something that youth of today might relate to more. The director is a painter so yes there are shots similar to paintings. But the point is that he doesn’t get over indulgent to the point that he looses the story.

This film is a beautiful amalgamation of how thought can be so limitless when faced with impediments. This is what will bring a tear to many a peoples eyes while watching this. But Mr Bauby wouldn’t want us to cry. He is sick and tired of all that cliches so please don’t cry while watching this one. You might just miss out on some great moments. You could probably cry after the movie is over. That is what I did.