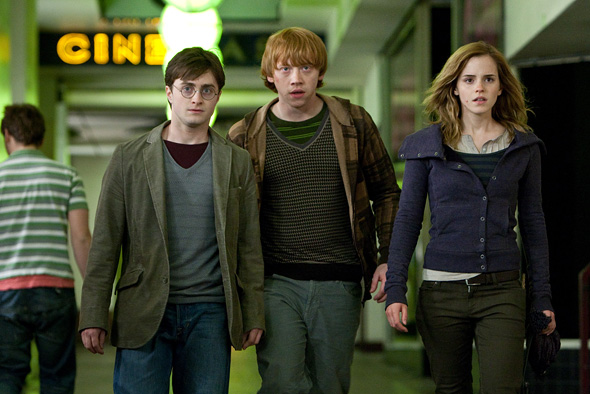 First Picture of Harry Potter in the final film This is the final film so everyone canâ€™t wait for this to come out next year. The last book the Deathly Hallows is being broken up into film so as to maximize profits. The Harry Potter Franchise is almost racing towards end. The same director and the same kinds are also back for this one. The picture featured on this page is something of a downer because it just shows the three of them waiting for something to happen.

The film stars Daniel Radcliffe as Harry Potter, Rupert Grint as Ron Weasley and Emma Watson as Hermoine Granger. Many people are calling the first one in the two part film as a road movie. In a way it is kind of true.

This time they are all on their own. The director had this to say about the approach to this film. “It’s going to feel very real,” Yates says. “We’re going for a vÃ©ritÃ© approach. Being away from Hogwarts, they’re like these three refugees on the run. They’re out in the big bad world, facing real danger, unguarded by those wonderful benign wizards at Hogwarts. They don’t have a home to go to.”