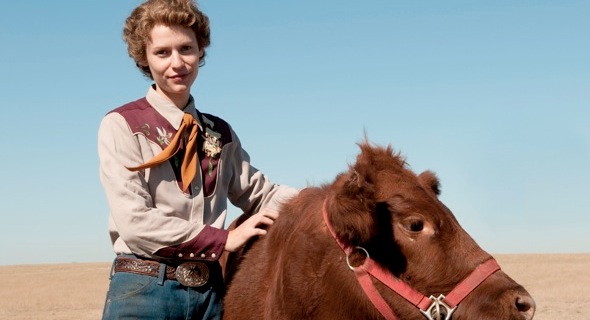 Claire Danes has been off the radar for sometime now. She has been working on films which were finding it difficult to get distribution. For Instance Me and Orson Welles was not able to secure any kind of distribution until now.

Now Claire Danes will be part of the TV scene with a film on Temple Grandin. She plays Temple, the title character from the autobiographical book called Thinking in Pictures: My Life in Autism.

Temple is known for her work in the Slaughterhouse industry. She achieved fame by designing humane, sweeping corrals that were designed to keep cattle calm while being led to slaughter. She has also designed some of the premium livestock handling facilities all aroung United States. She is also mentioned in several other authorsâ€™ books.

Danes emulates Grandinâ€™s quirky mannerisms and speech patterns beautifully. She will be in for some great award nomination next year based on how the trailer will look. There was also some footage of Temple Grandin speaking about the project and how closely Claire resembles her. The biggest challenge for Claire Danes was to see the world as an autistic does, even if it was in a sort of limited fashion.

Temple Grandin will premier on HBO on Feb 6 th.