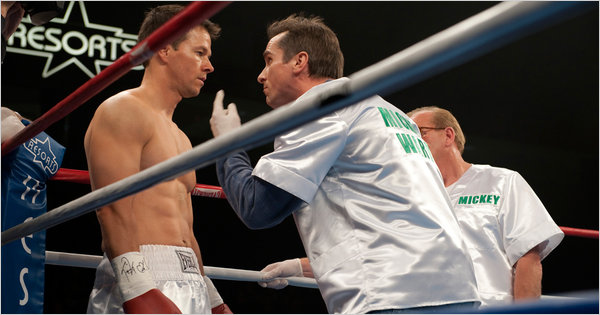 Christian Bale in images from Fighter Here is another image from the next film from David O’ Russell’s beautifully demented mind. The film is The Fighter and it will be boxing drama. It was championed by Mark Wahlberg and also stars Christian Bale.

The film centers on boxer Irish Micky Ward and his recovering drug addict/former boxing brother who helped train him before going pro in the mid 1980s.

Wahlberg trained for two years straight for the film. There were loads of people attached to the film. The film was always in the danger of collapse. But things look upbeat right now finally.

Mark Wahlberg worked towards getting this film made. He pushed his favorite director David O’Russell to take the gig after a lot of convincing. Here is what Wahlberg had to say to the Times.

“Many times I thought it wasn’t going to happen,” Wahlberg recalled, even getting to the point where he thought, “if I don’t get this movie done the way I want to, I’m going to use this training on somebody in a bad way.”

The film is said to be a crowd pleaser with a lot of dark laughs. The film now has the full backing of the studio after the actors made the film their own. So it will be expected to come out on December 10 th. Check out the stills and tell us what you think.