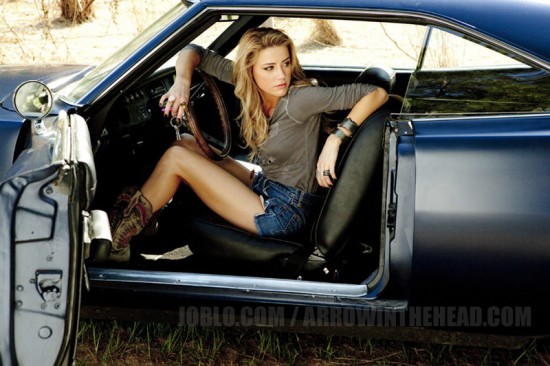 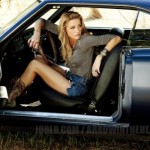 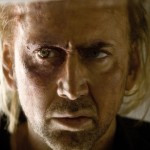 This is going to be another movie which will showcase Amber Heard lesser acting chops and reveal just the physical nature of her acting. This woman has very little variety last playing a Zombie in Zombieland. The hot Zombie did her some good at least. Now she will be seen alongside Nicolas Cage in his next movie called Drive Angry.

Amber Heard is working hard to get established in the industry but it is not worth the trip to see Nicolas Cage in this movie with a brand new wig. He really needs to retire and the images actually show us a point of how old this man actually is.

Here is an official synopsis of the film

In the newest 3D action-adventure from the director of MY BLOODY VALENTINE, DRIVE ANGRY stars Nicolas Cage as Milton, a hardened felon who has broken out of hell for one last chance at redemption. Intent on stopping a vicious cult who murdered his daughter, he has three days to stop them before they sacrifice her baby beneath a full moon.

Heâ€™s joined by Piper (Amber Heard) â€“ a young, sexy waitress who liberates her ex-boyfriendâ€™s cherry-red muscle car in order to help Milton. Now, the two of them are hot on the trail of the deadly leader of the cult, Jonah King (Billy Burke), who believes it is his destiny to use the baby to unleash hell on earth.

But the bloodthirsty cult is the least of Miltonâ€™s problems. The police are after him too. And worse, an enigmatic killer known only as â€œThe Accountantâ€ â€“ who has been sent by the Devil to retrieve Milton and deliver him back to hell. With wicked cunning and hypnotic savagery, the Accountant will relentlessly pursue Milton at high speed across the country until his mission is accomplished. Fueled by high octane and pure rage, Milton must use his anger to go beyond all human limits to avenge his daughterâ€™s murder, before his last chance at redemption is revoked.